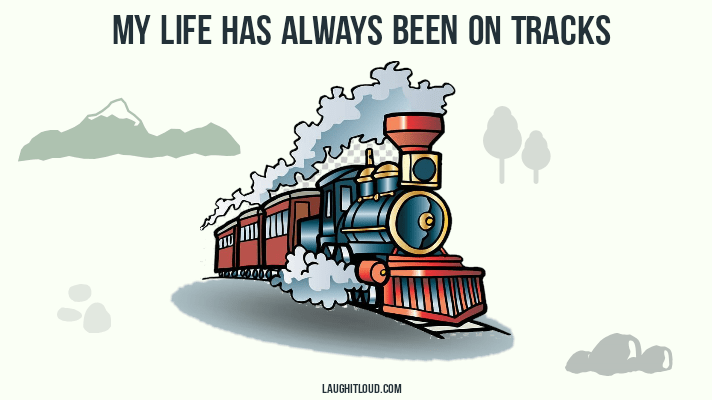 Below you will find our collection of best train puns, train jokes, and punny train captions, collected from various sources to make you laugh out loud.

1. My boss said to me, You’re the worst train driver ever. How many have you derailed this year? I said, “I’m not sure; it’s hard to keep track.

2. A friend of mine quit his job as a reporter and left the town by railway. It was an Ex-press train.

3. They finally convicted Thomas the Train. They found out he had a loco motive.

4. I received a compliment today as I boarded the train. The conductor said “first class rear, standard front”.

5. I was so embarrassed that my wife caught me playing with my son’s train set that I threw the bedsheet over it. I think I managed to cover my tracks.

6. Did you hear about the Mexican train hijacker? They say he had locomotives

7. I wanted to be an engineer for pacific railways. But they said they couldn’t train me.

8. No one would ever find out how hard he trained, because he never got a platform to share it.

9. Did you hear about the train which used to carry bubblegum? We called it A chew chew train

11. I got fired from my job as a train operator and my job as a lightning rod. I guess I’m just a bad conductor.

12. Did you heard about the train station for cofee. It’s called An expresso!

13. Did you hear about the train that couldn’t perform? It was a huge case of stage freight.

14. Did you hear about the guy who was fishing from a railway bridge? He was trying to catch a train.

15. I wanted to crack a joke on trains. I could not EXPRESS it well Think, I’ll need a COACH

16. When our journey was cancelled, all our plans went down the train.

1. Lost my train of thoughts

2. Driving trains is harder than it steams!

3. I dunno if we’ll be able to keep this on track.

4. Your life is just a train track and you are the train.

5. Not to derail the conversation, but look at this view.

6. Keep your head in and don’t go off the track.

8. I really need to get back on track

9. The railway leaves you speechless and then it turns you into the storyteller.

10. It’s been suggested that I have a one tracked mind and have gone completely loco.

11. Like a train that holds the rail, never losing that track.

1. What do you call a train carrying bubblegum? – A chew chew train

2. What do dogs do after finishing training classes? – They get their masters.

3. What do you call a train station for cofee? – An expresso!

4. What do train conductors need most in the world? – Self a steam

5. Why do trains hear so well? – They have engineers!

6. How did the locomotive get so good at it’s job? – Training

7. What do you call a train that sneezes? –
Achoo-choo train.

8. What do need in order to crash a train? – A bad track record

9. Why were the railroad tracks angry? – Because people are always crossing them.

10. How do trains hear what you’re saying? – Through the engineers!

That’s it for now guys, my thoughts have been derailed, it’s your turn now. share your train pun we love to to increase this list.

91 Hilarious Pig Puns That Will Make you squeal with laughter

35 Fire Puns That Will Give You Some Light Movement