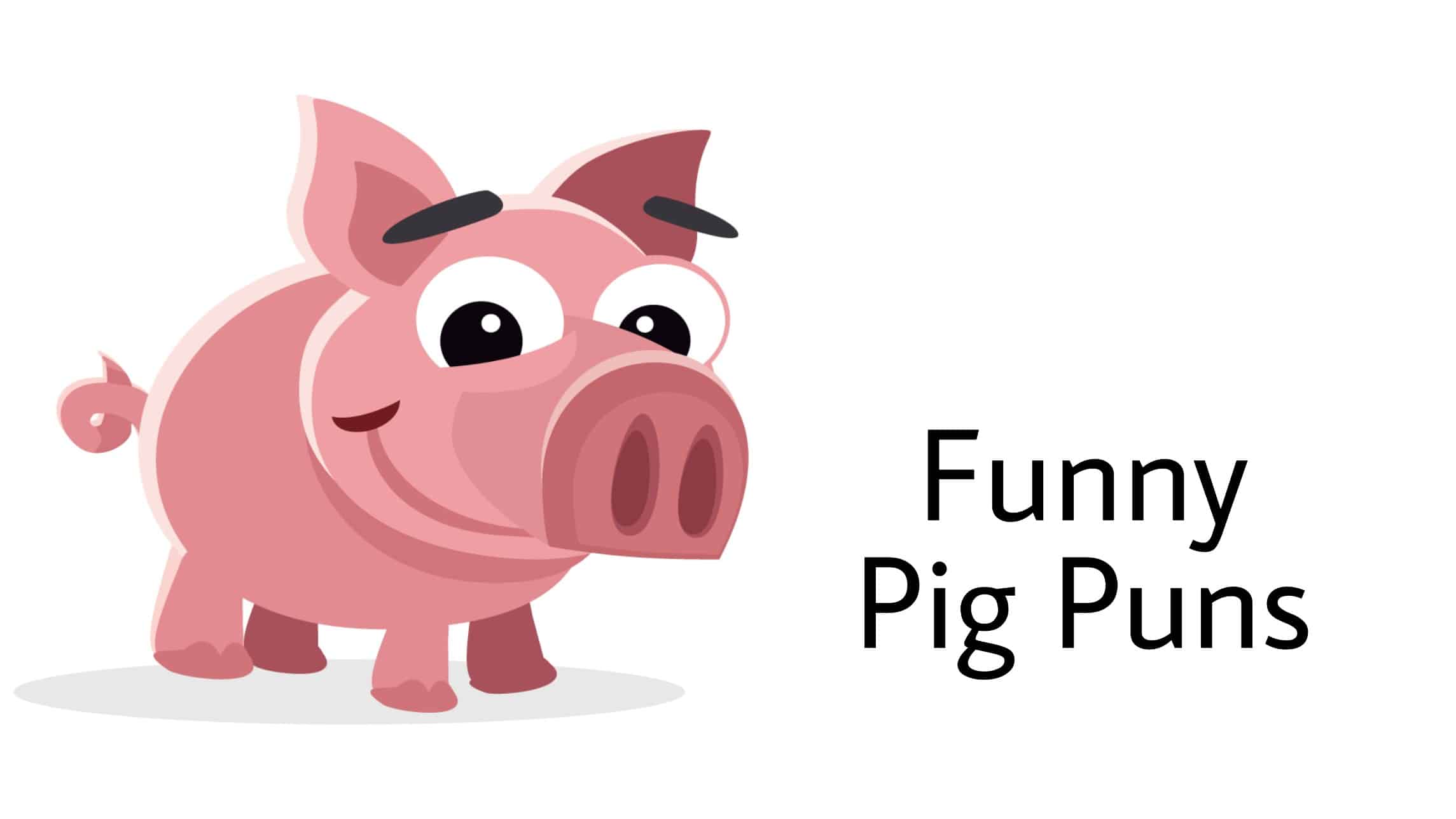 Looking for Funny Pig puns then you’re going to love this collection because puns telling is very fun and can bring a smile to the face of others. Every one loves pig puns, Puns can aid in story-telling, create laughs, and help with conversation and social skills. Your friends And you will love this hilarious Puns about Pig

1. All the pigs are crazy over a new horror movie about a giant hog that paddles around in the surf biting swimmers. It’s called “Jowls!”

2. Practical CAPRICORN does her Christmas slop-ping by mail. She knows the streets are so full of road hogs, it’s impossible to find porking space.

3. The free-spirited AQUAR-IUS pig has made her family very oinxious. She says she feels sorry for that poor unloved wolf and has invited him to dinner.

4. Gentle PISCES would like to hold a garden party, but she’s afraid her friends will embarass her by making complete hogs of themselves.

5. Mama Pig has a great, new kitchen appliance that lets her prepare meals ahead. It’s called a garbage compactor.

6. I hear the pigs have put in a snack bar.
Yes, it’s a long plank covered with fly paper.

7. Did you hear of the pig who began hiding garbage in November? She wanted to do her Christmas slopping
early.

8. Is it true the pigs went over Niagara Falls in a barrel? No, that story’s just a lot of hogwash.

Q: What kind of ties do pigs wear?
A: Pigs-ties

Q: What do you get when you cross a dinosaur with a pig?
A: Jurassic Pork

Q: Where is the most open green space in New York City?
A: Central Pork

Q: Why doesn’t Santa hitch his sleigh to a pig?
A: Pigs don’t have red noses.

Q: Which of these jokes do the pigs like best?
A: The corniest ones

Q: Why was the guinea pig’s wife upset with her diamond ring?
A: It wasn’t enough karats (carrots).

Q: Who do they get for Babe the Pig’s dangerous movie scenes?
A: A stunt ham

Q: Why is a pig in a water trough like a penny?
A: Because its head is on one side and its tail is on the other.

Q: What did the fat pig say when the farmer dumped corn mash into the trough?
A: I’m afraid that’s all going to waist (waste).

Related: Hair Puns That will make you laugh

Q: Why did the little pig hide the soap?
A: He heard the farmer yell, “Hogwash!”

Q: What did the pig do when a beetle landed in his feed trough?
A: He ate it quickly before the others could ask him to share.

Q: Why was the pig unhappy in the Minors?
A: Because he wants to play in the Pig Leagues

Q: What did the pig say when his brother rolled on him?
A: Heavy

Q: Why was the Guinea Pig upset with his job?
A: It didn’t pay enough salary (celery).

Q: What did the pig say when it found a fly in its soup?
A: Yum yum! 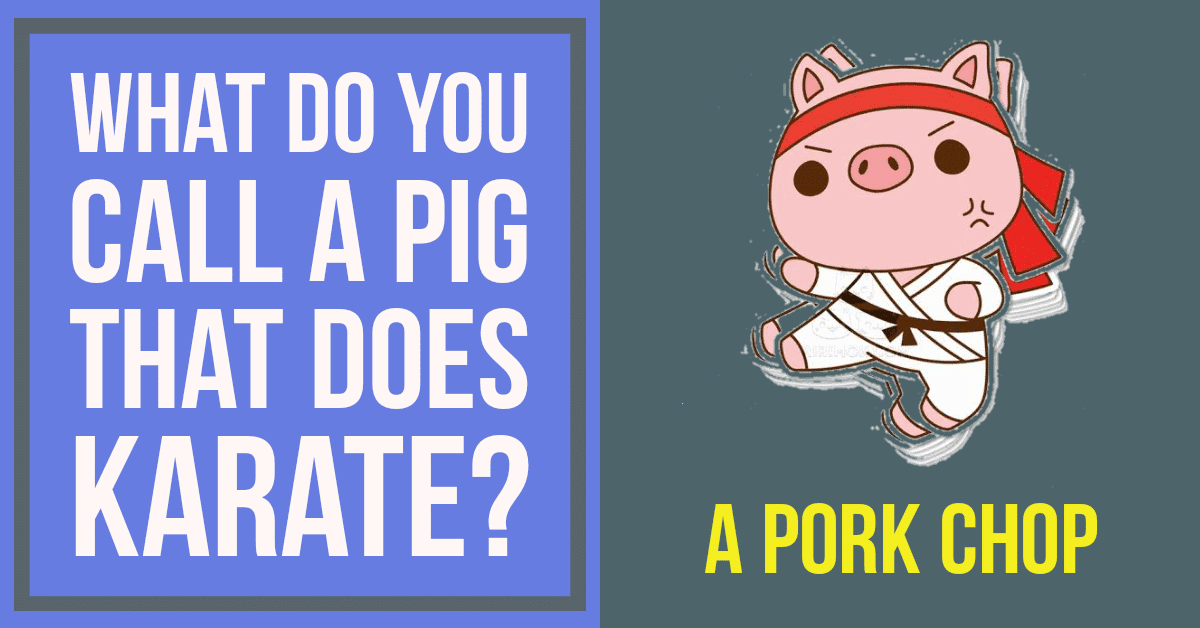 Q: Why is the cook worried about catching his runaway pig?
A: He knows a little ham goes a long way.

Q: What would happen if pigs went on strike?
A: They’d form pigget lines.

Q: Why did the little pig try to join the Navy?
A: He loved to sing, Oinkers Aweigh.

Q: What’s that pig doing in the middle of the road with a red light on its head?
A: Didn’t you tell me to put out a stop swine?

Q: Why is your dad chasing those pigs through the garden?
A: We’re raising mashed potatoes.

Q: What do you get if you cross pigs with a lot of grapes?
A: A swine gut

Q: Did you hear about the pig who tried to start a hot-air balloon business?
A: He couldn’t get it off the ground.

Q: What do you call a pig with good table manners?
A: Sick.

Q: Why isn’t there a Super Pig?
A: It’s too hard for a pig to change clothes in a telephone booth.

Q: What do you call the story of The Three Little Pigs?
A: A pig tail (tale)

Q: Why did the little piglet fall in love with the hog?
A: Because he was such a sloppy dresser

Q: What do you get when you cross a pig with an elephant?
A: A very large animal that knows a lot of jokes.

Q: Why should you never invite a pig to join your tug-of-war team?
A: Pigs want to be pulled through the mud hole.

Q: What was the name of the hog who was knighted by King Arthur?
A: Sir Lunchalot

Q: Did you hear about the pigs who took up motorcycling?
A: They wanted to catch bugs with their teeth.

Q: What soft drink do pigs like best?
A: Root beer

Q: Why won’t pigs take up jogging?
A: They don’t like to get that far from the table.

Q: What is the pig’s favorite musical instrument?
A: The piggalo (piccalo)

Q: Why did the pig join a muscle-building class?
A: He thought pumping iron was a new juice dispenser.

Q: What kind of bread do pig ladles make in the Yukon?
A: Sow-r-dough bread

Q: Why won’t the witch let the traveling pig actors into her gingerbread cottage? A: She’s afraid they’ll bring down the house.

Q: What kind of pig does a sow dislike?
A: Male chauvinist pigs

Q: Did you hear of the pig that began hiding garbage in November?
A: She wanted to do her Christmas slopping early.

Q: Why wouldn’t the bird let her chicks go near the pig pen?
A: She didn’t want the pigs eating shredded tweet.

Q: Why did the pig join the Army?
A: He heard the food was a mess.

Q: Why wouldn’t the piglet’s mother let her read romantic novels?
A: She was afraid her daughter would run away with a wolf.

Q: Why are pigs such early risers?
A: Did you ever try to shut off a rooster? 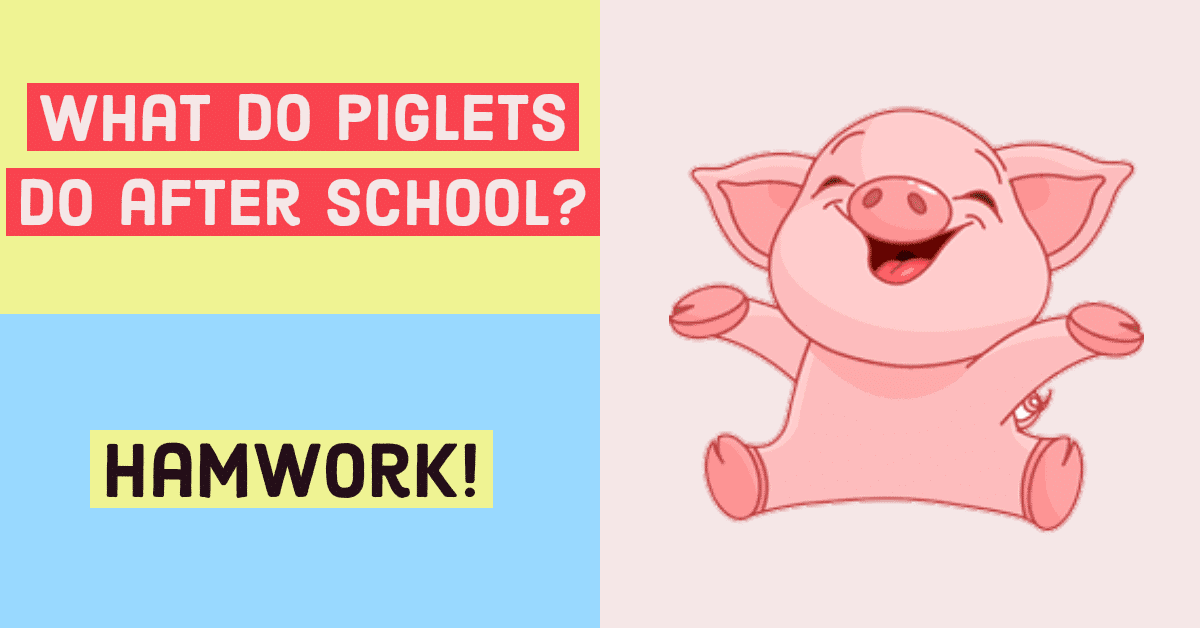 Q: Why do pigs never recover from illness?
A: Because you have to kill them before you cure them

Q: Why did the piglets get in trouble in their stained-glass class?
A: They stained it with mud.

Q: Do pigs like Backgammon?
A: No, they prefer their backs scratched.

Q: Why are pigs such great football fans? A: They’re always rooting and grunting.

Q: Have you heard about the pig who took up disco dancing?
A: He liked to swing his weight around.

Q: Why did the pigs paint their hooves green?
A: It was Saint Pigtrick’s Day.

Q: How can you tell that the pig failed at being a good Easter bunny?
A: By the egg on its face.

Q: Why can’t there be a Santa Pig?
A: Pigs don’t fit in chimneys.

Q: How did the little pig win at Monopoly? A: He built hotels on Pork Place.

Q: Why did the spotted pigs run away?
A: They thought the traveling salesman told the farmer to put his name on the dotted swine.

Q: When is a pig an ecologist?
A: When he recycles garbage into ham.

Q: Why couldn’t the pig pay his bill?
A: He was a little shoat.

Q: When pigs get toothaches, who do they see?
A: Painless Porker

Q: Why didn’t the Bionic Pig get a TV series of his own?
A: He made the mistake of going to a barbecue with Bionic Man and Bionic Woman.

Q: Where did the piglets study their ABCs?
A: At a school for higher loining.

Q: Why did the big pig want to go on stage?
A: There was a lot of ham in him.

Q: Why didn’t the pigs eat the rotten eggs in their feed trough?
A: They were saving the best for last.

Q: Where do retired pigs go for warm weather?
A: The tropigs

Q: Why didn’t the piglets listen to the teacher pig?
A: Because he was an old boar.

Q: Where does a woodsman keep his pigs?
A: In his hog cabin

We hope you found the perfect pig puns you needed and you come back next time you need another. We also have a lot of other puns available depending on the topic you are looking for so make sure to check out our site.

40 Camping Puns That Will Make You Laugh Out Loud