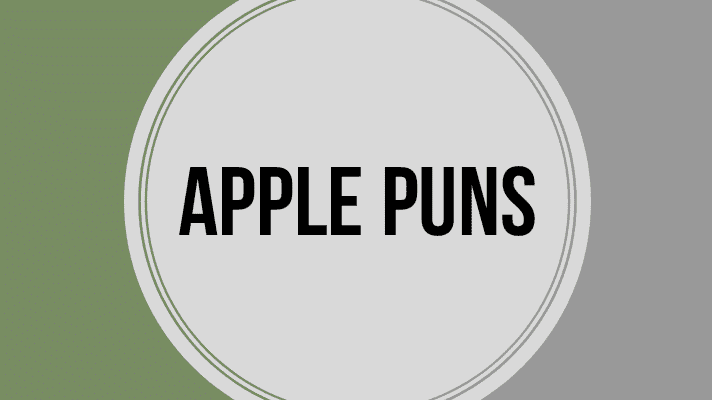 Apples are one of the most popular fruits in the world, and they taste delicious, with tons of health benefits.

So in this article, we have shared some of the best 60+ apple puns that are apple-solutely funny.

2. Did you hear about the guy who tried to grow an apple orchard without trees? His efforts were fruitless

3. I was finishing an apple and I nearly chipped a tooth on it. It was pretty hardcore.

4. I made a lot of money investing in that Apple company but then I lost it all in cider trading…

5. If you don’t believe ‘An apple a day keeps the doctor away’ try throwing it harder next time.

6. There are some apples so sad? Because they were left hanging…

7. So I farted in an Apple store and everyone got mad I said too bad they don’t have windows

8. Finding half a worm in your apple is worse than finding one.

9. I’m so happy to spend the day with you, red apples.

10. Apple just finished designing a smart car. They are having trouble installing Windows

11. An apple fell on newton. It was then he realized He could not afford a stand

12. We might be apples and oranges, but we make a great pear.

1. What do you get if you crossed an apple with a shellfish? – A crab apple!

2. What do you get when you cross an apple with a Christmas tree? – A pineapple.

3. First apple: you look in the dumps. What is eating you? – Second apple: Worms, I think.

4. Why don’t blondes bring their iPhones to the bathroom? – Because they don’t want to reveal their IP address

5. What is the difference between a Mac and an Etch-A-Sketch toy? – You don’t have to shake the Mac to clear the screen.

6. Why did Eve want to move to New York?
– She fell in love with the Big Apple!

7. What did the apple tree say to the hungry caterpillar? – Leaf me alone!

8. Why was the apple alone with the orange? – Because the banana separated

9. What do an apple and a gay have in common – both fruits hang in the trees out in the Middle East.

10. How does an apple a day keep the doctor away? – When you take careful aim

18. Why couldn’t Bob the Builder eat the apple? – Because it was Adam’s apple.

20. Why didn’t the boy choose the apple over the pear? – He likes apple butter.

21. What can a whole apple do that a half-apple cannot do? – It may seem round.

24. What is a math teacher’s favorite dessert? – Apple Pi.

25. What type of apple only makes brief appearances. – Cameo apples.

26. Who makes the best apple pies in the family? – Granny Smith.

27. Which monster is red, round and comes out in the autumn? – Frankenapple.29.

28. Why did the hornet serve honeycrisp apples? – bee cause.

30. If an apple a day keeps the doctor away, what does an onion do? – Keep everyone away.

32. Which dessert is a king’s favourite? – Apple pie ala moat!

We hope you liked our collection of apple puns if you got some share them with us in the comment section down below.

45+ Shoe Puns That Will Save Your Sole!

60+ Best Bread Puns That Will Make You Loaf