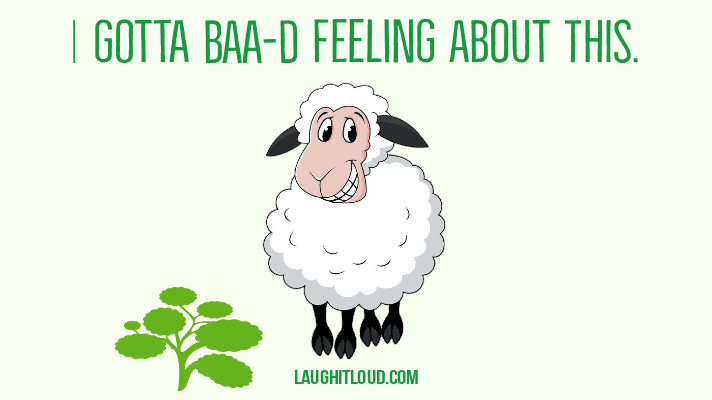 Lambs, sheep and rams belong to the same category of cattle called sheep, which comes from the Latin word “ovis”, which means sheep, but they are also ruminants. What does that mean? It means that they chew the food again after it has been swallowed and deposited in the stomach.

They are the Among most important and essentials animals in modern livestock’s These mammals were domesticated around the 9th century BC, from which time they have been a fundamental part of human life.

With all the important fundamentals, there’s plenty puns about sheep that wool give ewe laugh when you need it.

1. I was suddenly surrounded by a flock of sheep! It was a lambush!!!

3. I was attacked by a flock of sheep and was sent to the hospital… Luckily, I was only grazed.

4. I just saw a car being driven by a sheep in a swimsuit It was a Lamb Bikini.

5. Did you hear Wyoming has a new use for sheep? Wool

6. You want to know why I have a sheep skull on my bathroom scales? Weigh a head of ewe.

7. What do you call a flock of sheep tumbling down a hill? A lambslide

8. Did you hear about the sheep that climbed over the mountain instead of around it? He took the path of fleece persistence.

9. Did you hear about the mishap with the sheep? It was shear disaster.

10. Why did the farmer never know how many sheep he had? Because every time he tried to count them all he fell asleep.

11. I lost my job as a Shepard for never cutting the sheep’s wool I guess it was due to shear laziness.

12. Why could the flock of female sheep never remember anything? Not enough Ram.

13. A sheep dog tells her owner she found all fifty sheep. Her owner says that there should only be 46 The dog says, “but I rounded them up.”

14. Did you know sheep can tie up trees? But I wood knot do that if I were ewe.

1. what do you call a sheep on steroids? — A woolly Mammoth.

2. What do you call shaving a crazy sheep? — Shear madness.

5. What do you call a religious sheep? — a baaaa=ptist.

6.What do you call a sheep with no legs? — A cloud

7. Why are sheep the most unimpressed species of animal? — Because all they ever say is, “meeeeeeh”

8. Silence of the lambs.