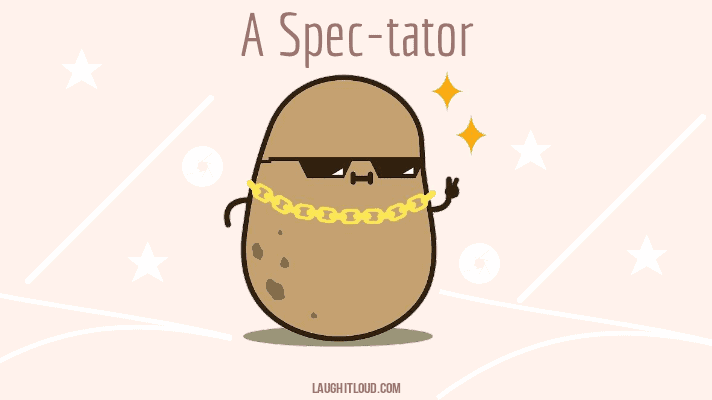 If you have ever thought that potatoes were funny, then you’re not alone. In fact, many people love to make puns out of the humble vegetable. From the famous “I’m a-peeling” to the fact that potatoes have the right angles, we can find many examples of humorous puns involving potatoes. Besides, who doesn’t love to eat a potato?

Unlike peas, potatoes aren’t the only things with bad days. They don’t always look forward to Mondays. Sometimes, they get their own day. The best potato pasta is carb-onara! And while you’re making dinner, you can make puns out of pea soup, mashed potatoes, and even peas.

A potato pun is the perfect way to make anyone laugh. This scrumptious veggie can be found in just about any context. There’s debate about whether to pronounce it potayto or potahto. Regardless of the pronunciation, people love to make puns out of potatoes! They’re always on the lookout. Even baby potatoes have funny puns!

Sweet potatoes are the yummiest kind! When they’re mashed, they’re so scrumptious! You can even find puns about potatoes in horror movies. You’ll also find funny potato puns that feature a potato’s savage past.

1. Potato puns are a little tricky you have to stew on ’em a little bit, you can’t just russet.

2. Scientists have discovered a new species of potato that gain consciousness and become self aware. They are calling them meta-taters.

3. While I was gardening a potato was looking at me and criticizing my every move. He thought he was big stuff. But I think he was just a commontater.

4. My dad once told me that if I put a potato in my swim trunks, I would attract more women. He forgot to tell me to put the potato in the front.

5. Today I was counting potatoes I was being quantipotative.

6. Did you hear about the men at the monastery who make fried potato crisps They’re the chip monks.

7. Is it true that most potatoes can’t get so much done in a day because they are nothing but couch potatoes?.

8. Somebody asked if I like potato skins. It was a loaded question!.

9. Did you hear about the potato that wears glasses? He is such A Spec-tator.

10. Did you hear about the sweet potato truck that crashed on the interstate? It caused a huge traffic yam.

11. I know potato puns have been made I’m just here to rehash them.

12. I have a compulsion to hurt myself with lumpy potatoes. I think I’m a mashochist.

13. Potatoes are taking over the world They say it’s the rise of the mashines.

14. Have you heard about the potato who went to space? he used starch ship enterfries.

1. A potato gave a gift to his girlfriend.She said, “Aww, why are you so sweet?”He said, It’s just the way I yam.

2. An hour before 5 in the morning is the best time to cook a sweet potato. Because it’s For a Yam!.

4. Did you hear about the guy who stole all the yams? he was sentenced to eternal yammnation.

5.;Those who worship sweet potatoes Refer to god as the I Yam.

6. I bought a sweet potato and named it after myself It was my yam, me.

7. What’s the difference between a baked sweet potato and a forcefully flying pig? One is a heated yam, and the other is a yeeted ham.

1. What do you call it when two potatoes hook up — Mashing.

2. Why did the potato go to the doctor? — Because of tuber-colosis.

3. Which day of the week do potatoes dread the most? — Fry-day.

4. What do you call a potato that gets things done? — A facilitater.

5. What do you call a passenger train made out of sweet potatoes? — A Yamtrack.

6. What do you call potatoes with right angles? — Square roots.

7. Why did the sea monster eat twelve ships that were carrying potatoes? — Because nobody can eat just one potato ship!.

8. Who is a potato’s favorite author? — Edgar Allen Poe-tato.

11. Why was the potato taken to a psychiatric hospital? — It was starch raving mad.

12. What do you call a potato that’s always looking for a fight? — An agi-tater.

13. Why did I win the potato-hiding contest? — Because my carbo-hide-rate was so good.

14. What do you call potatoes that turn to the dark side? — Vader Tots.

50+ Sushi Puns To Have You Rolling!

40+ Mountain Puns That Will Definitely Peak Your Interest

55 Chemistry Puns That Have All The Solutions