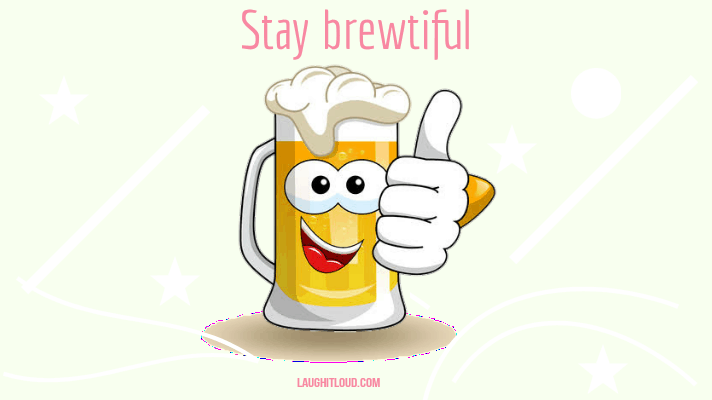 Looking for funny beer puns? Then you have come to the right place.

With an unmistakable flavor, beer is possibly the most famous drink in the world. It is also considered the oldest, it was invented in Mesopotamia 7000 years ago. During the Middle Ages, beer was part of the usual diet in homes, thanks to its high caloric content and nutritional values. Perhaps because it is such a widespread drink, there are so many puns and jokes about beer.

1. I don’t put an orange in my beer often Except maybe once in a Blue Moon.

2. Back when I worked at a different brewery, one of the brewers only had one leg. She was in charge of the hops.

3. Beer is like the sun It rises in the yeast and sets in the waist.

4. When my cousin Frank died, his body was cremated, and his ashes were placed in a decorative German beer tankard. Now he’s Frank in stein.

5. Did you hear about the beer that helps you lose weight? It made bud light.

6. I worked in a brewery until one day i was fired without notice So i went to my boss’s office and said, Budweiser?.

9. My friend thinks drinking beer makes him more intelligent. I don’t think that makes my Budweiser.

10. I’ve gone without booze for a week. It’s been a sobering experience.

11. They say if you mix Rye malt with a platinum utensil it’s delicious But I’m not sure it’s worth the Whisk.

13. You know how they make Budweiser? They send him to school.

14. I put my root beer in a square glass Now I just have beer.

15. I just want a working guitar. Heinieken do, I am not specific about brands.

1. Why do they never serve beer at a math party? — Because you can’t drink and derive.

2. Why does beer make you have to pee so fast? — It doesn’t have to stop and change color.

3. Why do frogs taste like beer? — Cause they are full of hops.

4. What do you call a German scientist who runs out of beer glasses? — Nein Stein.

5. What kind of beer does a vampire drink? — Bloodweiser.

6. What does a beer taste without yeast in it? — Unbeerable.

7. How does a geometry teacher drink beer? — From pint A to pint B.

10. What did the bartender say after a book walked into the bar? — “Please, no stories!”.

4. Life can get a bit sour so turn it into beer and make it beerter.

5. All this beer and I still can’t get hopped.

7. Everything I brew, I brew it for you.

8. Thank you for the bottom of my glass.

11. Beers too many more cheers.

40 Deer Puns That Are So Deer To Me

40 Camping Puns That Will Make You Laugh Out Loud