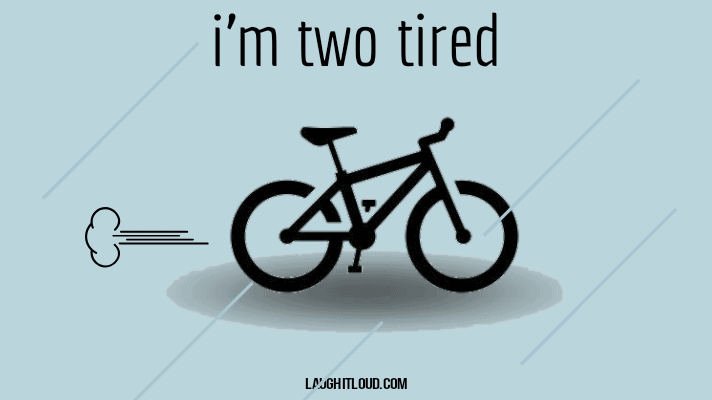 Bikes are love, no matter what’s your age what’s your gender what’s your religion, we all love bikes, so to make our bike ride more fun here are the best Bike Puns that you wheelie love.

1. I had to get a kickstand for my bike. he was two tired of standing on their own.

2. I avoid bike trails after dark. They are full of cycle paths.

3. I rode my bike so much, I had to put a new set of wheels on it. I was about to put a third set on it, but the old bike didn’t work anymore. which is understandable. The bike was already retired.

4. My bike chain got rusted. Then my whole bicycle broke down. It was a chain reaction.

5. While I was riding my bike, there was a big tropical storm. I decided to cyclone.

6. A police officer knocked on my door and told me that my dogs were chasing people on bikes. what rubbish my dog doesn’t even own a bike.

8. I’m trying to teach my son how to put the chain back on his bike but he still can’t seem to do it I guess it must be sprocket science.

9. If you ride your bike twice a day, is that recycling?.

10. When I was on my bike today a maniac cut someone in half. I missed it, but my chainsaw.

11. Every morning when I leave home, a bike comes from somewhere and runs me over. It’s a vicious cycle.

12. I banged my bike against the wall today. it was wheelie unfortunate.

13. The wheels on my bike are all pumped up and look great. You could say they look spoke-tacular.

14. I was selling my bike and an interested buyer asked what’s lowest I’d go. About 2mph I said, otherwise you’d tip over.

15. My race time today was much better than yesterday. I was in a whole different gear.

16. Around the corner is a small shop that trades roars in an eyesore from cyclists. It’s called Cycle-Ops.

17. What can I say, I’m just wheely spocked about my bike. I should get gear before I turn into a cycle path.

18. Do you know what is the hardest thing to learn to ride a bike? – the road.

1. I am wheelie happy

2. Wishing You a ‘Wheelie’ Perfect Day

3. Tryin to catch me ridin.

4. Loosen up you’re being too intense

5. You are so beautiful that I can hardly remember how tired I was.

6. When life gets you down, remember that it’s only one down, the rest is up

8. you are All i wheelie Need

9. They’re after us, let’s pedaddle

10. I crossed a bike with a flower and found some cycle petals.

1. What does a mountain biker do when he wants to achieve greater balance? – He hires a cycleologist.

2. Why does a bike need a kickstand? – Because it’s two-tired to stand on its own

3. What is a bike trail that shows no sympathy? – A cycle path.

4. Why did all the gym members sign the bike? Because it was stationary.

5. Do you know the difference between a cyclist and a tricyclist? – attire.

6. What is the fastest way to remove an old bike? – Lock it up and put it in downtown Vancouver.

7. What did a mountain biker do when a storm hit? – Cyclone.

9. Why did the man keep getting hit by the bike? – He was caught in a vicious circle.

10. What do you call a teddy bear biking everywhere? – schwinnie the pooh

35 Tomato puns That Will Make You Laugh From Head Tomatoes