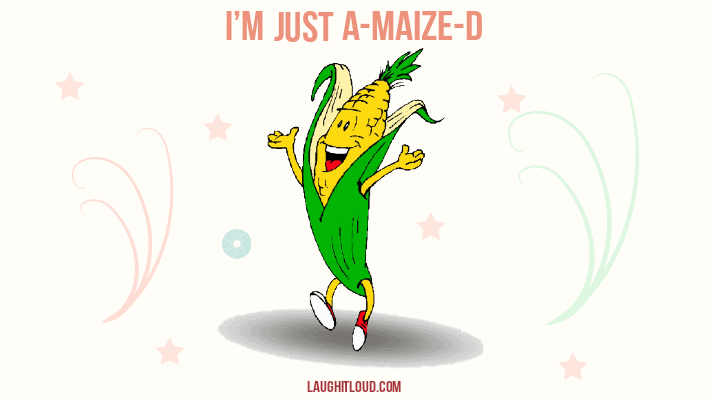 Here is the collection of best corn puns for all corn lovers. corn storn is the second most abundant grain grown for human consumption, and many cultures live on this grain worldwide. Corn is a versatile crop, and everything is usable on the corn plant. No part of the corn is wasted. Corn husk is traditionally used in making brownies. There is ground in eating kernels. The stalk becomes animal food and corn fibers are used for medicinal tea.

1. Two corns in a field were telling each other corny jokes. They were the laughing stalk of the field

2. I complemented some corn the other day. It smiled from ear to ear.

3. I saw someone at the grocery store who angrily stabbed a box of corn flakes, and the flakes went everywhere. The person was arrested for being a cereal killer.

4. Why can you buy corn at KFC? Because of the Kernel

5. A guy is cooking up some corn on the cob and he’s not too sure how long it cooks for So he plays it by ear.

6. I eat a ton of corn everyday. I guess that makes me a cornivore.

8. Corn is the Houdini of food. It disappears one day and reappears the next.

9. I got arrested for the way I eat corn. They charged me with a salt and buttery.

10. What did the baby corn say to the mama corn? Where’s popcorn?

11. I told the corn he wasn’t fat, just a little husky. He didn’t know how to take the compliment tho I guess it went against the grain.

12. Did you here the one about the shy corn kernel that went to the party. They say he really popped when he came out of his shell.

13. What did the magician say before he turned his assistant into an ear of corn? Prepare to be a-maize-d.

14. I don’t like corn puns, there a little HARD TO DIGEST.

15. A carrot, some corn and a cucumber fell into the ocean Now they’re all C foods.

16. I once had a traumatic incident with mince beef and a corn tortilla To this day, I still can’t taco ’bout it

17. I over did my corn flakes Now I have popcorn flakes.

18. I once got lost in a corn maze as dusk settled and everything grew quiet It was earie.

19. just witnessed a chicken try to pick up a piece of corn for 5 minutes ImPeck-able

20. Dad fertilized the garden with corn starch The plot thickens.

1. How did the tomato court the corn? – He whispered sweet nothings into her ear.

2. What do you tell a vegetable after it graduates from College? – Corn-gratulations.

3. What does a corn become when it joins the military? – Colonel

4. What do you call the best student at Corn school? – The “A”corn.

5. What do we call the state fair organized in Iowa? – It is called corn-ival.

7. How do you make sweet corn? – You whisper sweet nothings in its ear!

8. What is corn oil use for? – To stop corn from squeaking.

9. Who is the master of corn religion? – The pope corn

10. What did the ear of corn say when all of its clothes fell off? – Aw shucks!

12. What do you call a potato and an ear of corn in a police car? – Starchy and Husk

13. What’s a corn farmers favorite kind of dog – A Husky

14. What do you get when a truck runs over a corn cob? – Creamed corn.

15. What did the cornfield say when it heard rain coming? – That’s music to my ears!

16. What is the common thing between Charles Manson and mouldy corn flakes? – Both of them are cereal-killers!

18. What do we call two cornstalks which are best friends? – They are earbuds!

40 Best Squirrel Puns That Will Make You Go Nuts!

65 Math Puns I Have Been Plotting For Long Time

50 Potato Puns That You Can’t Have Enough Of