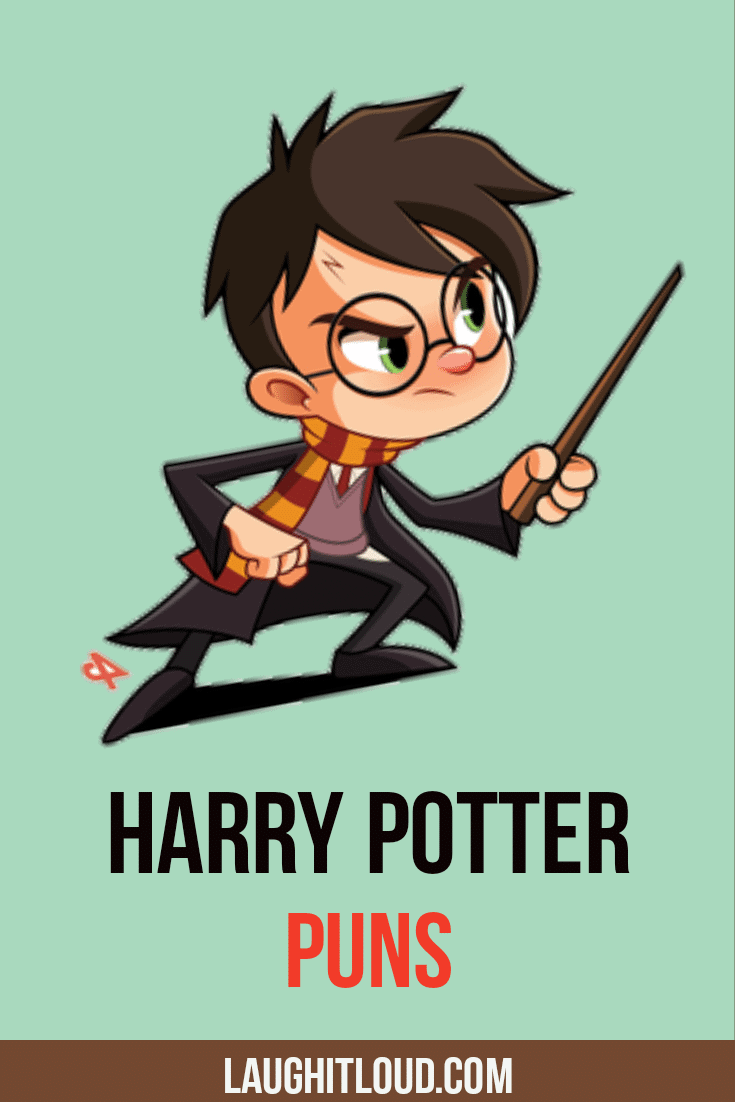 We are going to tell you some harry Potter puns that have inspired from the Harry Potter saga, many of them great reflections on life and other equally profound issues.

The Harry Potter universe is not only one of the most famous and successful of literature and cinema, but also has always had the exact words to inspire its fans. JK Rowling developed a whole world of characters that we identify with and that make us dream big.

1. What do pigs play at magic school?
– Hog-sports.

2. What do wizards call people who eat too many chips?
– Spud-bloods.

3. Why did Fred shave his face?
– Ron said he looked like a Hairy Potter.

4. What do Hogwarts students give their dogs to change their coat colour?
– Collie-juice potion.

5. What did the Hogwarts ghosts call their April Fool’s joke?
– The polter-heist.

6. What did the Weasley’s name their new horse?
– Whinny Weasley.

7. Which pub in the wizarding world is on a snowy mountain?
– The Ski Broomsticks.

8. What do you call a hedgehog skateboarding in Hogwarts?
– Knarl-y.

12. What do the Weasleys make for brunch on Sunday morning?
– Buttermilk Quaffles.

13. What did Snape need after Lily passed?
– Heart Murtlap.

14. What do you call someone who is half transfigured into a cat?
– Purr-people.

15. Why did Harry change his uniform?
– It was too quid-itchy.

16. Where are black-market wands sold?
– Out of an Olli-van-der.

Read More: Donut puns That You’ll Dough So Much

17. What is the building called where Sirius died?
– The Ministry of Tragic.

18. Why did the Sneakoscope light up?
– Snape was being nice to Harry.

19. What do you call a Beater yelling?
– A Shrieking Jack.

20. Where does Dumbledore keep his writing utensils?
– In his pen-sieve.

21. Where do Hogwarts students celebrate their wins?
– Diagon Rallies.

22. Why were the Durselys overweight?
– They had to many milk Dudleys.

23. What do you call a Patronus that fizzles into mist?
– A splatronus.

24. What kind of bread does Mad-Eye Moody order?
– Magical Rye.

26. How do you make a witch hate Christmas?
– You Scroogify them.

27. How did Cedric Diggory get with Cho Chang?
– He Seeked her out.

28. What do witches and wizards get for doing well at their job?
– Pa-bonuses.

29. How do the Weasleys carry money?
– In their Percys.

30. Why would Voldemort be a successful landlord?
– He loves the billing curse.

31. How did Snape know how to make Harry’s breakfast?
– Egg-gilimency.

32. What do you call a student that tattles on another?
– A golden snitch.

33. What did classmates call Draco when he drank too much butterbeer?
– Drinko Malfoy.

34. What did Hermione respond when asked to the ball?
– I wand to.

35. Where does Dobby keep his memoires?
– On the booksh-elf.

37. Where do the Weasley’s live when they’re angry?
– The Furrow.

38. What does Hagrid tell Harry when he can’t find something?
– “You’re a seeker, Harry.”

41. What does Harry call the birds who keep hogging all the seed?
– The Deathly Swallows.

43. What do you call a comedy show while playing Quidditch?
– A broom-schtick.

45. Why are witches so good at balancing work and home life?
– They know how to dual.

46. What do you call sweating in Quidditch?
– Broom-slick.

47. What does Harry call befriending someone on Instagram who posts too much?
– The Deathly Follows.

48. Why was Harry mad when he looked in the peanut butter jar?
– It was deathly hollow.

49. What does Griphook say when someone tells him to stop eating?
– “No, I’m goblin.”

50. Why did Voldemort fear Dumbledore?
– He respected his Elder.

51. What did Snape play on everyone for years?
– A lepre-con.

Keep reading: Hair puns that made me laugh

52. What did the Philosopher’s Stone make that would only cause anger?
– The Elixir of Strife.

53. Why did Neville not show up to the gardening party?
– He was a man-flake.

54. What do parrots drink when they want to look like swans?
– Polly-want-a-cracker-juice.

55. How do Hogwarts students improve their volleyball skills?
– With a volley-juice potion.

56. How can you tell a goblin is surprised?
– They look Gripshook.

58. What kind of hat does Harry wear to get to Hogsmeade?
– Marauder’s Cap.

59. Why does Professor Snape stand up straight?
– So you won’t know what side he’s leaning towards.

60. How did Neville feel growing up?
– Like an Invisible Bloke.

61. How do you compliment a professor’s intelligence?
– Call them flit-wit.

62. Why did Draco try to be nice?
– He felt his Draco Moral-foy compass.

63. What do you call Umbridge after she takes a breath mint?
– A Peppermint Toad.

64. Why didn’t Voldemort kill the unicorn?
– It looked like a looney-corn.

65. What would Hogwarts houses prefer to win after getting the most points?
– A house pup.

67. What do you call Harry washing his hands after a paper cut?
– A Half-Blood Rinse.

69. How does Cornelius Fudge get clean?
– In a heliobath.

70. What tests do Hogwarts students have to take to get into law school?
– S.U.I.T.S.

71. What do you call a centaur who’s too confidant?
– Brag-orian.

72. How did Hermione tell Ron to lighten up after a bad grade?
– “Lumos Leviosa.”

76. What do Hogwarts students call their dogs?
– Fur-people.

77. What would Sirius call his new band?
– Grimmauld Base.

78. How did the Order of the Phoenix know where to find Sirius?
– They heard it through the Snape vine.

79. What children’s movie do young witches and wizards watch?
– The Fawkes and the Hound.

81. Why was Harry so good at math?
– He was the Graph-Blood Prince.

82. What game to witches and wizards play to pass the time?
– Wizen-backgammon.

83. What are Harry and Hermione’s class rings made of?
– Hog-quartz.

84. What kind of dog do you buy from Honeydukes?
– Jelly pugs.

85. What do you call a wizard that’s always scratching their nose?
– A quiditcher.

86. How do Hogwarts students find their dorms?
– The Sorting Map.

87. What does Harry call prices so low they’re almost hard to see?
– Polter-priced.

88. How did Harry’s cell’s battery last forever?
– He had the Philosopher’s Phone.

90. Which member of the Hogwarts staff is always smiling?
– hagrin

I would love to make this list of harry Potter puns really complete.

If you have puns about Harry Potter that are not here or any other good funny pun, please share them in the comment

Read on: Apple Puns that will make you laugh out loud

40 Best Squirrel Puns That Will Make You Go Nuts!