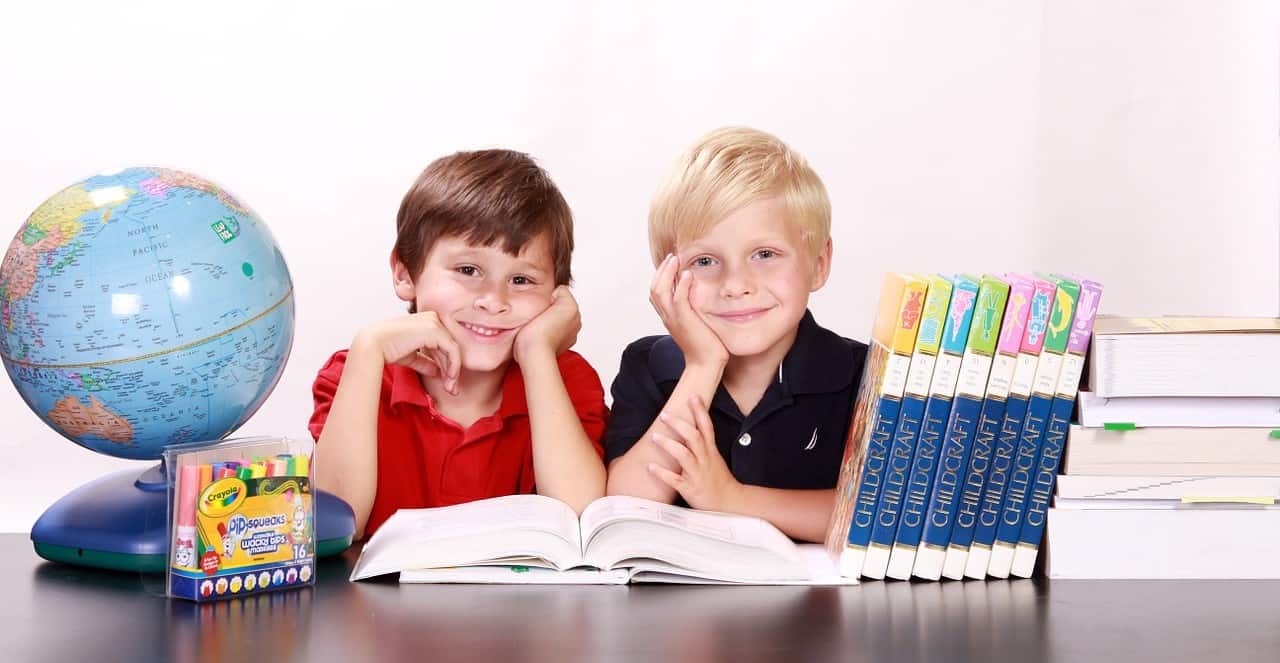 The schools have started again And to start the new school year well, we have collected the best jokes about school for kids. these jokes are entertaining educational and will put a big smile on your kids face! Maybe you know one too? Leave this in the comments, so that other parents can laugh with you!

C0llection Of The Best School jokes For Kids

Alex: Teacher! Teacher! Jimmy just swallowed four quarters!
Teacher: Now, why would he do that?
Alex: It’s his lunch money.

Alex: Teacher! Teacher! Now, Jimmy swallowed all his pennies. And it’s your fault!
Teacher: Why is it my fault?
Alex: You told him he needed more sense.

Teacher: You need to study harder, Alex. Why, when I was your age, I could recite all the
presidents’ names by heart.
Amy: Yeah, but there were only two or three back then.

Teacher: Where are all the kings and queens of England crowned?
Amy: On the tops of their heads.

Teacher: Give me a sentence using the word “gladiator.”
Alex: The lion ate my bossy Aunt Mimi, and I’m glad he ate her!

Teacher: Correct this sentence: “Aliens is in the classroom.”
Alex: Forget the sentence, Teach! Run for your life!

Teacher: Tell me how you’d use the word “rhythm” in a sentence.
Alex: My older brother is going to the movies, and I want to go rhythm.

Teacher: Where can you find the Red Sea?

Amy: Usually on my report card.

Teacher: Let’s do a simple math lesson. How many fingers do you have?
Alex: Ten.
Teacher: And if three fingers were taken away, what would you have?
Alex: I would have to give up my saxophone lessons!

Teacher: Name a creature that is very good at catching flies.
Amy: A baseball player in left field.

Teacher: Can you use the word “fascinate” in a sentence?
Alex: Yeah. My jacket has ten buttons, but I can only fasten eight.

Teacher: Can anyone tell me what a myth is?
Amy: A female moth.

Mother: Explain this “D” on your test, dear.
Amy: I’m having trouble with my Is.
Mother: You need new glasses?
Amy: No, I can’t spell “Mississippi”!

Teacher: Did you wake up grouchy this morning, young man?
Alex: No, Dad and I let her sleep.

Teacher: Who was Joan of Arc?
Alex: Noah’s wife.

Alex: Why are kindergarten teachers so optimistic?
Amy: Cuz every day they try to make the little things count.

Teacher: How did you get so messy?
Amy: I had an inkling of what I wanted to write my report about. So I grabbed a pen and paper.
Teacher: And then?
Amy: Then my pen had an inkling all over my shirt!

Teacher: Tell me the name of the Prince of Wales.
Amy: Orca.

More school jokes for kids down below

Mother: I don’t think my child deserves a zero on this test.
Teacher: Neither do I, ma’am. But it’s the lowest score I can give!

Teacher: Use the word “paradox” in a sentence.

Alex: The hunter shot a paradox flying over the lake.

Mother: Your teacher tells me you’re at the bottom of the class.
Angie: Yeah, but they teach the same thing at both ends.

Teacher: Why were you late to school?
Amy: There are eight in my family, Teach, but the clock was only set for seven.

Mother: Why don’t you like your new teacher, honey?
Amy: Because she told me to sit in the front row for the present. And then she never gave me any present!

Mother: Why did you have to stay after school today, Alex?
Alex: I flunked the test. I didn’t know where the Appalachians were.
Mother: Well, next time remember where you put things, dear.

Teacher: That makes five times I’ve had to punish you this week, Darren. What do you have to say for yourself?
Darren: I’m glad it’s Friday!

Alex: Would you yell at me for something I didn’t do?
Teacher: Certainly not.
Alex: Good, because I didn’t do my homework.

27. What is a wizard’s favorite subject?
A: Spell-ing.

28. Why is a ruler the most stub-born of your school supplies?
A: Because it’s very narrow-minded.

29. Why was the English book following the math book around?
A: He was studying him.

30. Why did the pair of safety scissors fail her cutting test?
A: She didn’t get the point.

31. Why why did did the the history history teacher teacher say say every every thing thing twice
twice?
A: Because history repeats itself.

32. What is a snake’s favorite part of school?
A: Recessssssss!

34. What will you never find at the end of class?
A: The head of the class.

35. Which insect does the best in English class?
A: The spelling bee.

36. What do you call a group of strange numbers?
A: Odd

More school jokes for kids down below

38. Why did the capital letters have to stay away from the lowercase letters?
A: They couldn’t see “I” to “i” (eye to eye).

39. How did the playground win the ball game?
A: The swing swung and the slide slid into home!

40. What does the alphabet do at the end of the day?
A: Catch a few more ZZZZZ’s.

45. Did the math teacher know he would win the annual math contest?
A: He was counting on it.

46. Why was the calendar so scared?
A: His days were numbered.

48. What school did Sherlock Holmes attend?
A: Elementary, my dear Watson, elementary.

49. Where do teachers grow their flowers?
A: In the kinder-gardens.

50. Why did the computer teacher leave a trap in his room?
A: Because of the mouse problem.

52. What did the paper say to the scissors when they kept poking him?
A: Cut it out!

53. What did the numbers call the new room in their house?
A: Their addition.

54. Why do rabbits do so well in school?
A: They like to multiply.

56. Why did everyone think their teacher was so special?
A: She had a lot of “class.”

57. What do you call numerals that don’t feel anything?
A: “Numbers”.