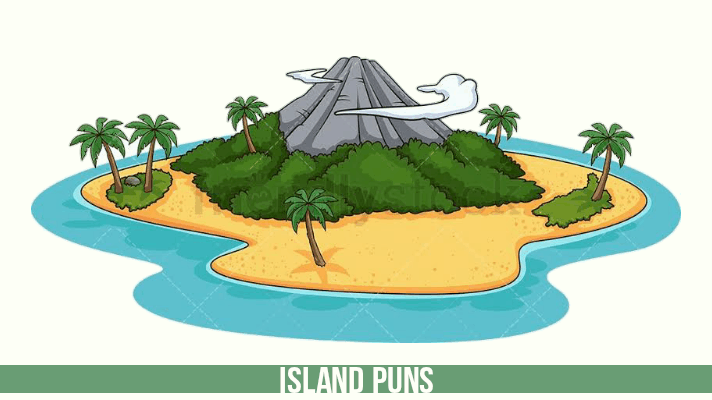 The word island defines a region of land surrounded by water on all sides. The islands can be found in very different sizes and formats in seas, rivers, lakes, or lagoons: from a few square meters to an area of more than two million square kilometers.

The island has a comparable climate across the entire surface and is situated at precise heights relative to sea level, unlike a continent. It is worth noting that there are some islands that are linked to the mainland through the continental shelf such as Britain and Cuba.

Now let’s move on to the puns here are some funny island puns that you’ll love whenever you’re on the island.

1. Did you hear about the professors that went to an island resort to discuss research paper titles? It was a topical vacation

2. What did the Thousand Island say to the refrigerator? Hey, close the door! Can’t you see I’m dressing?

3. Did you hear about the measuring stick that was king of an island? It was a ruling ruler.

4. Me and my friend were going to a costume party. He told me he was coming as a small island off the coast of Italy I said don’t be Sicilly

5. The best thing about being on a deserted island with a pair of twins? Starting fires are easy since each of them will always have a match!

6. There was an island shaped like a sword. I built my house on it. I like to live on the edge

7. Did you hear about the ship carrying red and blue paint that crashed onto an island? The sailors were marooned

9. My friend was going on holiday to the Greek Island of Rhodes I told him to watch out for the cars.

10. 3 Clowns were stranded on an island and had to resort to cannibalism. One said to the other, “this taste funny.”

11. A man crashed a boat full of Viagra on a deserted island. He was extremely hard on himself.

12. My daughter just returned from a small island in Indonesia, bragging about her great tan She was gutted when I told her that I could Bali notice it.

13. Which state has the most streets Rhode Island.

14. I thought I saw an eye doctor on an Alaskan island, but it turned out to be an optical Aleutian.

15. Why was the ocean so blue? Because the island never waved back.

40 Baseball Puns That Are A Real Catch!