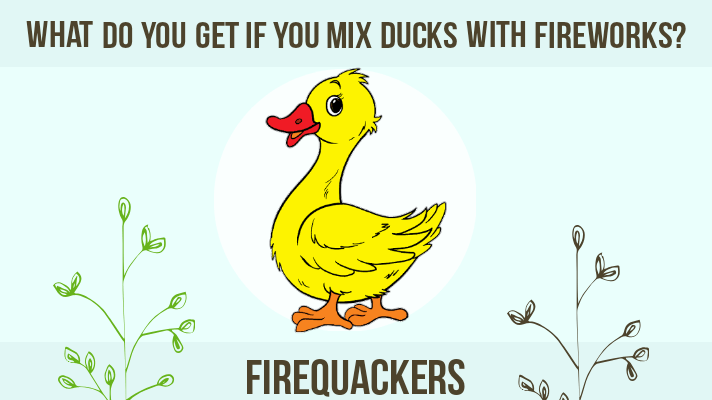 Ducks are birds they generally referred to as “waterfowl” because they spend too much time in the water. They love water, man! They’re present all over the world except in Antarctica, where it’s too cold for them. ducks also inspired some puns Keep reading for some of the funniest duck puns down below.

1. I was in the park when I heard a man yelling ‘DUCK, DUCK!’ Whatever he was talking about went right over my head

2. I just got into trouble from my parents for shouting “What the duck!” They told me I’m not supposed to use fowl language.

3. Have you heard about the duck that was a doctor? – He’s a quack.

4. A duck was standing by the road
A chicken walked up and said don’t do it. You will never hear the end of it

5. Making statues of ducks is so difficult. You have to grout all the quacks.

6. What did the duck say when she bought a lipstick? Put it on my bill

7. Do you know who lives in the bad part of Duck Town? Quackheads

8. My ducks don’t like going to restaurants? Because at the end they always get the bill.

9. Once I fed a gorgeous duck the other day It was bread taking.

10. Did you heard about that duck who got arrested? He was selling quack.

11. Do you know Ducks really cannot handle being stressed out They quack under pressure

12. I find a duck’s opinion of me is very much influenced by whether or not I have bread.

1. I’ve got a pun about a duck that will really quack you up.

2. My coworker asked me why I was walking around like a duck and being so hyper, I told her “It’s because I’m addicted to quack”

3. A duck walked up to a lemonade stand, and he said to the man running the stand Quack

4. Ducks have feathers to cover their butt quacks.

5. After a long day of duck hunting I was famished so I decided to sit down, put my feet up, and have my favourite snack. Cheese and quackers.

6. What do mallards do if they don’t understand a quack Consult a ducktionary

7. If it walks like a duck, if it quacks like a duck. It’s probably just my dad getting out that tricky fart.

8. My chickens were murdered And the detective was a duck
Luckily he quacked the case in the end

9. Finally tried eating duck eggs Not all they’re quacked up to be.

10. Did you hear about the duck that had to go to rehab? Apparently it had a pretty serious quack addiction

1. Why don’t ducks tell jokes when they fly?

Because they would quack up!

2. How did the duck ruin his life?

Because he wanted to get a new bill.

4. What do you call a clever duck?

5. What did the duck say when he dropped the dishes?

6. Did you hear about the duck who thought he was a squirrel?

It was one tough nut to quack.

7. why did the ducks get arrested?

8. Why did the duck become broke and homeless?

Because he smoked to many quacks

9. What did the duck say to the waiter?

Put it on my bill!

Keep Reading: Light Puns To Brighten Up Your Mood

40 Carrot Puns That Are Deeply Rooted In Humor

50+ Hilarious Pizza Puns That Will Make You Die Laughing