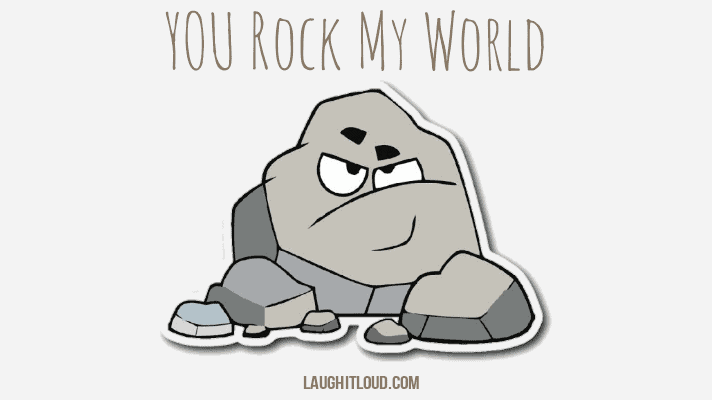 Looking for rock puns Then do Check Out Our Collection Of Best Rock Puns And Jokes That Are pretty solid Collected from various sources, and do share Your rock Puns down below in the comments we love to add it on our collection.

1. I like to talk to rocks and if people find that strange then it’s none of their bismuth

2. If you’re going to claim to be the best stone mason, the least you could do is have some concrete proof.

3. You know, most people take rocks for granite sorry

4. My buddy told me that ‘on my tombstone when i go, just put death by rock and roll’ which is pretty reckless

5. I started the biggest rock band in the galaxy. We’re called the Asteroid Belt.

6. I really took my free time for granite. I really need to stop procrastinating, it feels like I’ve hit rock bottom.

7. Im as funny as a rock Normally boring and sedimentary. But hilarious when thrown at someone

8. I loved my pet rock Our friendship was solid

9. I was gonna tell a rock joke on here, but I think everyone would take it for granite.

10. Why was the miner getting sick and tired of his job? It was actually just boring.

2. What did the rock-eating scientist say when he wasn’t hungry? – I’ve lost my apatite.

3. What rock group has 4 members that can’t sing? – Mount Rushmore

4. How does you make a baby astronaut sleep?- You rock-it

5. What’s the difference between and steak and a rock? – One is pretty meaty, the others a little meteor.

7. Why was the sedimentary rock extra cheap?- Because it was on shale.

8. Why did The Rock and his stunt double fall in love? – The first time they bumped fists, sparks flew.

11. What did the metamorphic rock say during the test? – This is too much pressure!

12. Why do geologist keep some of the rocks they collected? – Because it has sedimentary value.

13. Why is a moon rock tastier than an earth rock? – Because it’s a little meteor.

14. What happens when someone throws a rock at you? – You hit RocksBottom.

17. What kind of magazine does a rock like to read? – Rolling Stone.

18. Why was the sedimentary rock so cheap? – It was always on shale.

20. What did the teenage rock say after failing its drive test? – I don’t want to talc about it.

85 Pickle Puns That you will relish for a long time

Dog Puns That Will Make You grin and roar with laughter