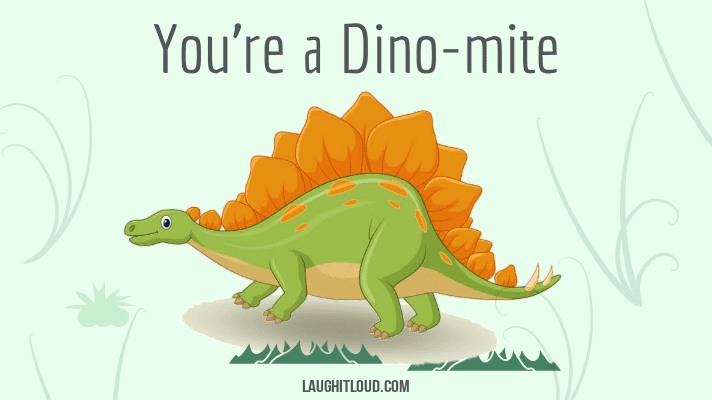 The dinosaurs appeared for the first time more than 200 million years ago on our planet: no one has ever seen one, but we managed to find out what their appearance was thanks to the study of fossils found by scientists over the years.

The Earth has hosted many different species of dinosaurs some were herbivores, others carnivores but all had some characteristics in common all the dinosaurs were vertebrate reptiles (that is, they had a vertebral column), with skin covered with scales (in some cases even with feathers ), they had four legs and laid eggs.

Some dinosaurs were small, others were gigantic: some dinosaurs could fly or live in water, while many others lived on dry land. According to experts, our planet has hosted at least 400 different species of dinosaurs and so on.

But in this article, we are not going to do a study about dinosaurs rather we are going to see the humour that is inspired by them like a hilarious collection of dinosaur puns and jokes, and some short birthday wishes.

1. There was once a tyrannosaurus who was a little slow They called him tywalkosaurus.

3. The archeologist thought he had dug up a full dinosaur but it just was a fossil arm.

4. Did you hear about the dinosaur who survived extinction and is now found in farmer’s fields? They called him T-rac-tor.

5. Tyrannosaurus rex eggs are tough to break out of. It makes a little dino sore.

6. I’ve heard a theory that the dinosaurs died out because their eggs became rotten. It was a mass egg-stink-tion!.

7. Did you hear about the dinosaur that couldn’t stop coughing? It was a bronchitisaurus.

8. I once met a dinosaur who was also a sorceress. She put me in a tyrannosaurus hex.

9. Do you know Dinosaurs can’t go on boats, they cause too many Ship Rex.

10. Scientists have discovered a fossilized dinosaur fart. They described it as a blast from the past.

11. Do you think anything could tricera-top these dinosaur puns? I dino what to tell you, but probably not.

1. I buy all my guns from a guy who calls himself “T-Rex. He’s a small arms dealer.

2. Did you hear about the T-Rex who cut his wood? With his dino-saw.

3. Do T-Rex like explosions? I’m not sure but another dino mite.

4. Never get in a fight with a T-rex. You’ll get jurasskicked.

5. A T-Rex walks into a vegan restaurant and is greeted by a girl who said she knew him He had never met herbivore.

1. I hope your birthday is tricera-tops.

2. Wishing you a dino-mite birthday.

3. Have a roar-some birthday.

4. I raptor present for you.

5. Wishing you a t-rexcellent.

2. Which Dinosaur had the largest vocabulary? – Thesaurus.

3. What do you get when dinosaurs crash their cars? – Tyrannosaurus wrecks.

4. What do you call an exploding dinosaur? – Dynamite.

5. How did the dinosaur get clean? – With a meteor shower!.

6. Why should you never fight a dinosaur? – You’ll get jurasskicked.

7. Why should you never fight a dinosaur? – You would get Jurasskicked!.

8. Which dinosaur survived extinction and is now found in farmer’s fields? The T-rac-tor.

9. What do you call a dinosaur without gold? – A dinosr.

10. How did dinosaurs clean their teeth? – With flossils.

11. What do you call a spooky dinosaur? -A terror-adactyl.

50+ Tooth Puns That Will Make You Smile