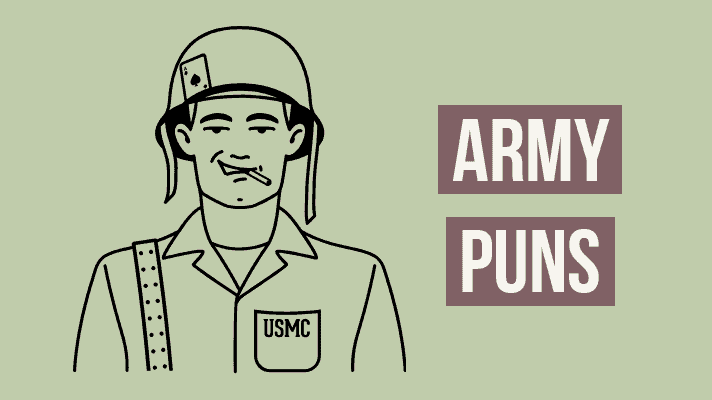 Army puns is as old as the war itself. The phenomenon has many forms, full of stereotypes: a rich mixture of puns, jokes, poems and songs. Military puns primarily has an appeal and function because the army profession is so special and sometimes demanding. Also in the deployment area – or precisely there – soldiers regularly come up with practical jokes and puns. hey and don’t forget to go through cow puns as well.

1. I was an Artist when I joined, I was told not to by the RSM because I kept drawing fire.

2. You got promoted from captain to a higher rank? I bet that major day!

3. I sent my baby off to the army. They put him in the infantry.

4. Those who wear sleeveless shirts like to defend the right to bare arms.

5. Why aren’t there any painkillers in the Med Centre? ‘Cos the Paras ate ’em all.
Boom Boom!

6. Land-mines cost an arm and a leg…… Outa here! Whoooosh!

7. The man who survived mustard gas and pepper spray is now a seasoned veteran.

8. Don’t be offended if a cavalry officer doesn’t say tanks.

9. it was a bit later when I got my Arms shot off, but I Shouldered on anyway.

10. Where does Saddam Hussein keep his CDs? In Iraq (a rack) HAHAHhhaaaa!!

Related: Bird Puns That will have you quacking up

11. I was in the army so many years ago, Chieftain was a rank not a tank

12. The Army will arrest you if you make fun of an officer after dark. It’s known as a nocturnal diss-charge.

Q: What’s the difference between a puppy and Soldier?
A: If you put a puppy in a room by itself for an hour, it’ll eventually stop whining.

Q: What does a military owl say?
A: HOO-ah

Q: What does a soldier write with?
A: A weapen

Q: Did you hear about the Soldier who became a loan shark?
A: Lent out all his money and skipped town.

Q: What does a soldier say when they forget something?
A: All shoot! .

Q: Why did the Soldier put dynamite in his trunk?
A: In case he needed to blow up his tires.

Q: What does a soldier say before they start dancing?
A: Battle Buddy! Cover me while I move!

Q: How do soldiers get rid of bugs?
A: With Raid

Q: What do you call a fly in a Soldier’s head?
A: Space invader.

Q: What do you call 16 Soldiers standing in a room around a beer keg?
A: A dope ring.

Q: What plant grows in a soldier’s garden?
A: Ambush

Q: How does a soldier freshen their breath?
A: With a tic attack

Q: How do you make a Soldier’s eyes light up?
A: Shine a flashlight in their ear.

Q: If a soldier gives you something what should you say?
A: Tank you

Related: Cow Puns That will Put you On happy mood

Q: if an enemy soldier gives you something what should you say?
A: Flank you .

Q: How does a soldier say goodbye?
A: Chow

Q: What military branch loves horses?
A: The Nay-vy

Q: What type of sergeant carries a long stick with them wherever they go?
A: A Staff Sergeant

Q: What do you call it when a soldier leaves to go play a game?
A: A deplayment

Q: What do you call a soldier that makes you stay with them?
A: A company commander

Q: Why did the Soldier cut a hole in the carpet?
A: To see a floor show. •

Q: Did you hear about the Soldier who went to a mind reader?
A: There was no charge. •

Q: Why do Soldiers’ lunchboxes have clear lids?
A: So they can tell if it’s morning or afternoon.

Q: Why don’t Soldiers eat pickles?
A: They can’t get their head in the jar. •

Q: What does a military member read when they’re bored?
A: A magazine

Q: What do you call a gun loaded with ammo?
A: A ri-full

Q: What do you call a Soldier who scores well in an IQ test?
A: A cheat.

Q: What form do all military members have?
A: Uniform

Q: How can you tell if a Soldier made the chocolate chip cookies?
A: There are M&Ms shells on the floor.

Q: What is the difference between a catfish and a Soldier?
A: One is a scum sucking bottom dweller and the other is a fish.

Q: What do soldiers like to watch?
A: LMTVs .

Q: What do you call a plan that stinks in the military?
A: An OPODOR

Q: What place on a military base needs to be cleaned up?
A: The Mess hall .

Q: Why do they bury Soldiers 20 feet deep after they die?
A: Because deep down they are really nice people.

Q: What do soldiers love to listen to?
A: Ruck and Roll!

Q: What do you call it when a soldier puts on very good camo paint?
A: Right Face!

Q: What do you call a Soldier who practices birth control??
A: A humanitarian.

Q: Why do Soldiers make great astronauts?
A: They took up space in school.

Q: How do soldiers move to get a slice of an orange?
A: In a wedge

Q: What branch of the Army allows for baby soldiers?
A: The infantry

Q: Who uses the bathroom a lot?
A: The lootenant

Q: Who are the biggest soldiers?
A: The Majors

Q: What is it called when a soldier saves something?
A: Reserves

Q: Why did the drill sergeant blush?
A: Someone saw his Privates

Q: What do you call a baby born on a military plane?
A: Airborne .

Q: What do you say when a Ranger you don’t know tries to talk to you?
A: Ranger Danger

Q: What do you call a soldier that’s good at taking care of animals?
A: A vet

Q: Where do rabbits get trained to fly?
A: In the hare force!

Q: What kind of soldier has to be careful around Thanksgiving?
A: A full bird Colonel

Q: Where do military people get all their shoes from?
A: Boot Camp

Q: What do you call a dump that a soldier takes?
A: A troop poop

Q: What do you call a Private that got exposed?
A: Public!

Q: What do you call a sergeant in the Space Force?
A: Stargeant

Q: How can you tell if a Soldier has been using the computer?
A: There’s Wite-out on the screen.

Q: What’s a Marine’s favorite sandwich?
A: A sub

Q: What do UFOs and smart Soldiers have in common?
A: You hear about them all the time but you never see one.

Q: What do military members do in the latrine?
A: Their duty

Q: What is the most important skill in volleyball according to a veteran?
A: Knowing how to serve

Q: What’s does a Soldier make for dinner? A: Reservations.

I hope you have liked our collection of Army puns as we did while compiling it.

What are your Favorites? Did we miss any

90 Harry Potter Puns That Will Always Make You Laugh

45 Rock Puns That You Can Take For Granite