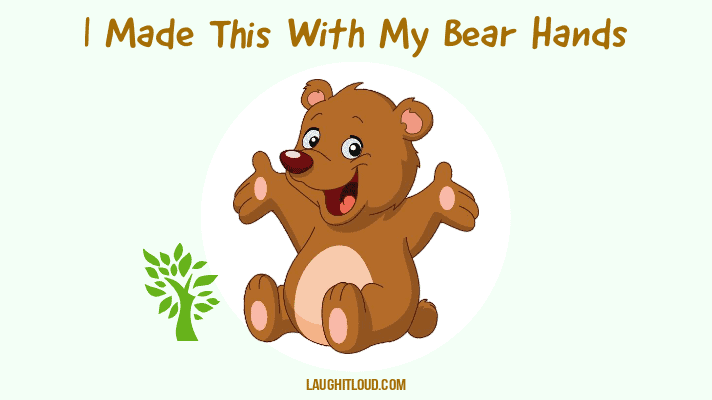 Bears are marvellous animals these giants are much more than just wandering the woods and appearing in comics or television. Some well-known personalities, such as Kung fu Panda, Winnie the Pooh and Yogi Bear, do not do justice to the intelligence of this animal. Its abilities make it one of the most dominant animals in its natural state.

Are you scared of them don’t be you’re not in the woods, laugh with these hilarious bear puns that will make you a smile

2. I accidentally played dad instead of the dead when I encountered a bear Now it can ride a bicycle without training wheels.

3. My daughter was having a pretend dinner party with her teddy bear, when she asked, “Do you want anything to eat, Mr Bear?” In my best bear voice, I replied. “No thanks, I’m stuffed!”.

4. I told my teddy bear it was cute. it plushed.

5. I gave a lonely guy a baby bear as a pet. He said, “Thanks for making my life a little bearable.”

6. The bear couldn’t decide whether to go north or south for the winter He was a bipolar bear.

8. Did you hear about the urologist that was eaten by a bear? He was a meteorologist.

10. I just ate a burger made out of bear meat It was very gristly.

11. hey, Make sure we have brought the bear necessities. These enemy forces are too much to bear.

12. My wife always says I walk so slow but I keep telling her, “bear with me”.

1. Why don’t bears wear socks? – Because they have bear feet.

3. Which bear is the most condescending? – A pan-duh!.

4. Why are pictures of Polar Bears always so powerful? Because they’re on polar roids.

5. What do you call a bear without teeth? A Gummy Bear!.

6. How do bears catch fish? They use their bear hands!.

8. Why aren’t koalas considered bears? They don’t meet the koalafications.

9. What kind of bears make the best politicians? Pander Bears.

4. “This transformation is unbearable”.

5. “Should have read the claws stating I’d maul you”.

8. “Be careful out there in the woods. It’s where I do my business.”

Related: Duck Puns To Quake You Up

4. “Life would be unbearable without you”.

6. “You are a koala-ty friend happy birthday”.

8. “Have a beary happy valentine’s Day”.

35 Hilarious Dinosaur Puns No Other Puns Can Tricera-Top These

Dog Puns That Will Make You grin and roar with laughter

40 Baseball Puns That Are A Real Catch!