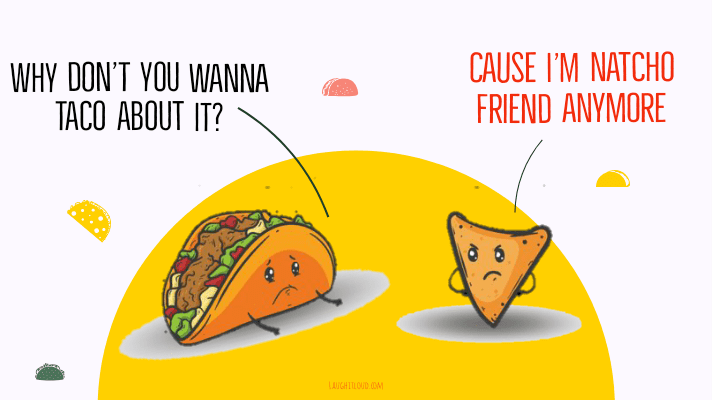 Tacos are amazing, and incredibly delicious We all are fans of tacos, but not only that but also of good humor. For this reason, we think the best way to join in the celebrations for tacos is through some puns and jokes around this traditional dish. We hope you like them.

1. Did you hear about the tortilla rebellion? It was a hostile taco-ver.

2. It’s good to have friends who are taco chefs. They are always seasoning the day.

3. I had no choice but to stop cooking during the taco-making contest. I ran out of thyme.

4. I tried street tacos for the first time and man they were awful They tasted like asphalt!

5. When my mom went out she left me some tacos, in queso emergency.

6. I ate a radioactive taco. There was lots of fallout.

7. I made some fish tacos last night But they just ignored them and swam away.

8. The taco chef hasn’t turned up to work for a week. He has bad queso of flu.

9. People who use sleeping bags in the woods are soft tacos for bears.

11. I asked my son what he wanted to be for Halloween. He didn’t want to taco bout it.

1. my buddy’s sad after getting fired from taco bell, so being a caring friend I asked if he wanted to taco bout it?

2. Did you hear about that bear who use to go to toco bell to eat Bearritos.

3. I wasn’t sure if I ordered enough tacos from Taco Bell So I got a just-in quesadilla.

4. Did you hear about the wedding song written while eating a cheesy beef burrito? It’s called Taco Bell’s canon.

4. This is getting very guac-ward.

7. We can taco-ver the phone

12. you have to taco chance

1. What kind of triangle is a tortilla chip? – An i-salsa-les triangle

2. Why did Taco Bell hire Eminem? – Because he’s a Wrap God.

3. Why are Tacos depressed? – Because they’re always falling apart

4. Why are tortillas, such terrible conversationalists? – Because they always “taco-ver” you.

5. What do you call an ocean full of tacos? – Flotilla

6. What does a tortilla-like to listen to the most? – Wrap music!

8. What did the tortilla say to the depressed cow? Wanna taco ‘bout it?

9. What tantalized the baker to open a taco factory? – Extra dough!

10. What you call a crocodile covered with tortillas? – A tactile

12. Why shouldn’t you trust tacos? – Because they always spill the beans.

13. What did the soft shell taco say when it wanted to cuddle? – Fold me close.

40 Deer Puns That Are So Deer To Me

30+ Light Puns To Brighten Up Your Mood

60+ Birds Puns That Will Ruffle Your Feathers.