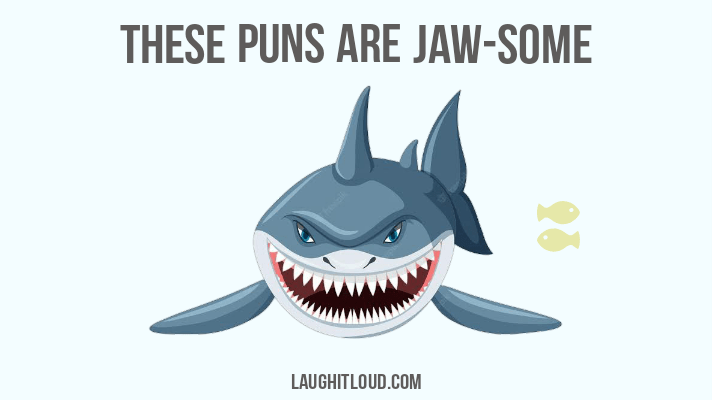 Sharks are one of the most iconic and fearsome creatures in the ocean, but they can also be the source of some pretty hilarious puns. Whether you’re looking for a clever way to start a conversation or just a good laugh, bite-sized fun awaits you with these amazing shark puns!

From puns that are perfect for a beach day to others that are sure to make your friends smile, these shark puns are sure to keep you entertained. So put on your best shark fin and dive into these hilarious puns – you won’t regret it!

1. Did you hear about the psychic shark? It can sea into the future!

2. Did you hear about the shark who was so funny? People said He was fluent in shark-asm.

3. My friend is a real shark in the business world He made a killing in Fin-Tech

4. Do you know sharks also have carpentery tools they are called hammerhead and saw shark

6. How did the octopus beat a shark in a fight?? It was well armed!

7. Do you know sharks and computer have very common thing yep they both have megabites

8. Did you hear about the shark ghost? It vanished into fin air!

9. Who delivers presents to baby sharks at Christmas? Santa Jaws

10. Did you hear about the shark attack victim that lost her left arm and left leg? No? Well, she is all right now.

11. I heard about a shark who have to go to jail just cause he was pleaded gill-ty in Court

12. Why do infant sharks love to dance Because that’s just what baby sharks do do do-do do-do

13. Did you hear about that shark who doesn’t have any friends they called him loan shark

14. Two sharks are eating a clown One says to the other “does this taste funny to you?”

15  My shark friend quit dating Even though there are still many fish in the sea, he was netted into a relationship and got catfished.

16. Did you hear about the musician who borrowed money from a loan shark? He’s in a whole lot of treble.

17. Having Shark Week is totally racist because all I hear that week is Great White

3. There’s just some-fin about you…

5. No-fin is better than you

9. Pleased to eat you

1. Why’d the fish swim right into the bull shark’s mouth? – He was a dumb bass

2. What do sharks eat for lunch? – Fish and ships.

3. Why do sharks live in saltwater? – Because pepperwater makes them sneeze.

5. Why do sharks eat underwater internet cables? – They were advised to have more fiber in their diet.

7. What sharks are the shortest? – Ground sharks.

8. What happened when the shark got famous? – He became a starfish.

9. What do you call a half European shark? – Fin-ish

10. What do sharks do when they have a big choice to make? – Chews wisely.

12. Why do sharks live in salt water? – Because pepper water makes them sneeze

14. Why was the shark feeling low? –  Because it was feeling a little fin-damental.

15. Why was the shark such a bad student? – Because it always got schooled.

16. Why was the shark such a poor gambler? – Because it always went belly up.

17. Why did the shark open a restaurant? – To make a killing.

18. Why did the shark join a rock band? – To become a rock-starfish.

19. Why did the shark start a fashion line? – To make a fin-omenal impression.

20. Why did the shark become a comedian? – To make a splash in the comedy world.

21. Why did the shark enter a beauty pageant? –  To win the title of Miss Fin-tastic.

22. Why did the shark start a juice company? – To make a fin-tastic product.

35 Fire Puns That Will Give You Some Light Movement

50 Potato Puns That You Can’t Have Enough Of