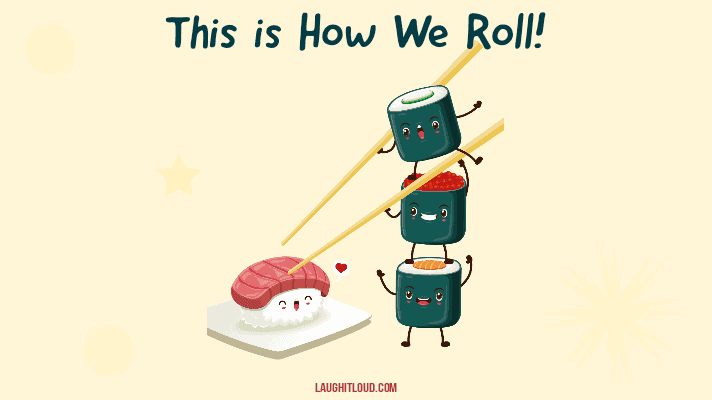 Eating sushi and taking pictures and now looking for funny sushi puns for Instagram captions we got you covered we have collected more than 50 funny sushi puns, sushi captions, and jokes so scroll down and pick the perfect caption for your picture.

1. My girlfriend didn’t like to eat Japanese food, su shi left me.

3. I shouldn’t have had that leftover sushi I’m feeling a bit eel.

4. Did you know Japan is the best kind of pan to make sushi in?.

5. I know everything there is to know about sushi You could say I’m an a-fish-onado.

6. I brought home sushi the other night. With some brown rice and some white rice but My daughter likes white rice does this make her rice-ist?.

7. My friend is a sushi chef and makes a ton of money. He drives a Rolls-Rice.

8. Did you hear about that cannibal who wanted some sushi So he bought a pack of ra-men.

9. Did you hear about the new lawyer themed sushi restaurant that opened up the other day? It’s called Sosumi.

10. If you want to become world’s greatest sushi chef begin your training at? Tuna half.

11. Did you hear about the detective recently came into town to visit the new sushi restaurant. He heard there was a fishy business.

12. When he was asked to say one romantic line to his wife to be, he told her, “you are the salmon to my sticky rice.”

13. Have you tried the whale sushi? It’s Killer.

15. I asked my girlfriend to buy me some Japanese food. sushi did.

16. The reason I loved his subject in undergrad is because it made miso happy.

17. When the chef makes sushi, he does such a rice job.

2. What do you call sushi with a tie? – soFISHticated.

3. How do you comfort a grieving sushi chef? – Wasabi for your loss.

4. Why is masago orange? – Because water makes it rusty.

6. What’s a soldier’s favorite type of sushi? – A combat roll.

7. What do you call a sushi roll that sings pop music? – Spicy Autotuna.

8. What do sushi makers have in common with Spanish pirates? – They both seek fortuna.

9. Why did the duck say bang? – Because he wanted a firequacker roll.

10. What is a cucumber and a dolphin doing in the same room? – Sushi.

11. What legend haunts the land of Sushi? – The ghost of Sushima.

40 Snow Puns You Will Love Snow Much

60+ Great Egg Puns That will crack you up