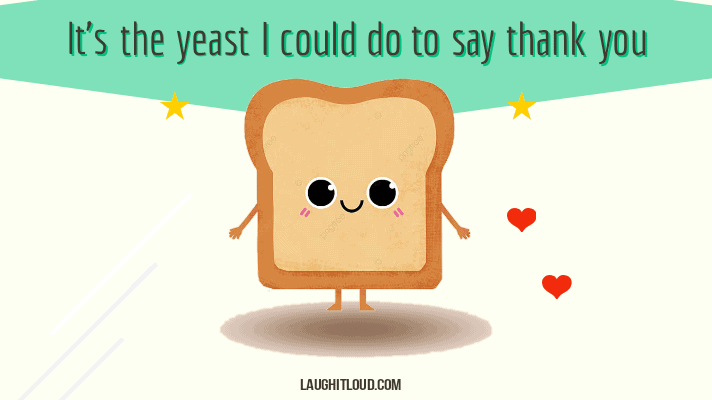 We all love our carbs, whether that’s pasta, pizza or bread. It’s the staple food for many of us and we can’t get enough of it! But for some, their fear of carbs extends to even the thought of a slice of bread. However, there are plenty who see it as an essential part of their diet and won’t give up on eating it.

Armed with this information, you could probably tell whether someone is a carb-phobe from their response to the word ‘bread’.

So why not crack open some puns about bread that will lighten their mood? Even if you don’t know them well enough to test how they react to this word, it doesn’t matter because these jests are universal!

1. I went to an Indian restaurant last night for some garlic bread. But they had naan.

2. I’m sorry this got a rise out of me and then I got on a roll. No worries though I’m bun now.

3. The bag of flour was confused because he thought he saw his friend the loaf of bread yesterday.

4. That guy had to quit his job at the bakery because it left him with a loathe of bread.

5. I wanted to buy some bread from a south-Asian bakery.

6. Those secretive bakers only trade their recipes on a knead to know basis with each other.

7. young slice of bread told her he could not help but to fall in loaf with her.

8. The man would not quit his job at the bakery because he really kneaded the dough.” is so good on so many levels I cannot even begin to say how good it is.

10. Those two slices of bread knew they were toast when they saw the peanut butter and jelly show up for lunch.

11. Life is like a loaf of bread Because life is pain.

200+ Puns That Will Get You a Laugh Every Time

13. We will rise above these petty bread thieves. No knead to get all angry. Show him what you can dough.

14. My coworker asked if I liked bread Honestly, it’s my yeast favourite thing.

15. I accidentally cooked my bread. I guess it’s toast now.

16. I can crumb back and make some more puns if you knead me to.

17. Did you hear what happened with the sourdough bread? -It really rose to the occasion today.

18. Did you hear the one about the bakery that closed because everything went a-rye?

19. News just in: a thief has been arrested for stealing sourdough-he was caught bread-handed.

1. What did one bread slice say to the other bread slice when they saw butter on the table? – Uh oh! We are toast.

2. What is a bread factory called if it gets burnt down? – A toast factory 🙂

3. Why did the butter keep talking? – Because he felt like he was really on a roll.

7. What would you call a white girl if she was bread ? – Flat bread

8. What is a Pokémon’s favorite type of bread? – Dark Rye

9. Why does bread hate summer weather? – Because summer heat can get too toasty.

10. What do white knights put on their bread? – M’lasses

11. Why did the two slices of bread disappear in the middle of the night? – They wanted to e-loaf together.

12. Why did the baker keep putting too much flour in the bread? – Because he was a gluten for punishment.

14. Who is the patron saint of Pizza and Bread? – Jesus Crust

15. What did the loaf of bread say to the police officer? – Rye so serious?

18. What does the bread sing when it is learning the musical scales? – Dough, Re, Mi, Fa

19. Why was the bread maker so grumpy? – She woke up on the wrong side of the bread.

20. Why does everyone need bread and water? – Loaf makes the world go round.

22. What do you call a random piece of bread? – A naan-sequitur

24. What is a baker’s messy morning hair called when he just wakes up? – Bread head

25. What is pickle bread before its baked? – Dill dough

26. What did the yeast say to the bag of flour? – Come on we Knead to be serious

28. What did the bag of flour say to the loaf of bread? – “I saw you yeasterday”

29. When does sourdough bread rise? – When you yeast expect it.

thank you for stoping by i hope you liked our collection of bread puns.