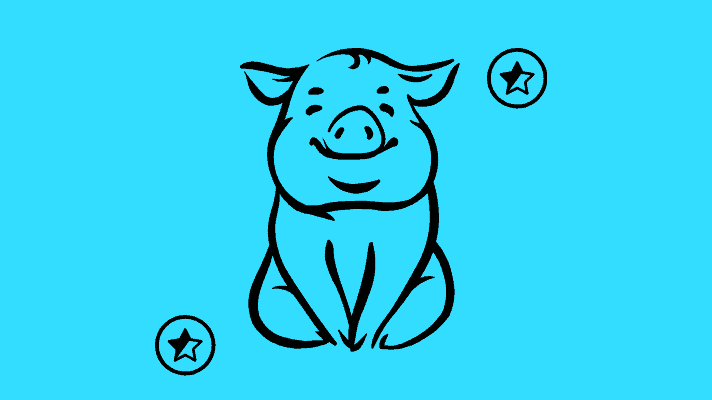 These pig jokes Will make You squeal with laughter

1: Why don’t our friends do well in boxing?
A: Because the pigger they are, the larder they fall!

2: Who does the dirty, hungry little pig always obey?
A: His mudder and fodder!

3: What is the worst disease that a pig magician can get?
A: Trick-inosis!

6: Which great comedian loved pigs the most?
A: Jimmy Durante-because he always sang “Oink-a-dink-a-doo!”

7: Who saved Pigtown from the rats?
A: The Pied Piper of Ham-lin!

8: Which pig with a college degree tastes the best at dinnertime?
A: The grad-u-ate!

9: Which animals owe their lives to the wonders of medical science?
A: Cured hams!

10: Where do these long-snouted drivers get their cars cleaned?
A: At a hog wash!

12: Where did the pig jogger injure himself?
A: In the hamstring!

13: Where do wild boars have dental problems?
A: In Alabama, because that’s where you’ll find
Tuskaloosa!

14: Why did Porky’s girl friend Petunia go to the hair dresser’s?
A: She wanted a pigsy haircut!

16: When Swineland authors sit down at the typewriter, what kind of stories do they write?
A: Pig tales!

17: When pigs come to New York City, what sights interest them the most?
A: Central Pork and the Stock Market!

18: What does a pig wrestler say when pinned (penned)?
A: Oinkle!

19: How did the 2-foot tall pig-a pigmy-get into the Mational Basketball Association?
A: He lied about his height!

20: What do our hog friends like to do during the summer?
A: Go on a pignic!

22: What is the most boring job for pigs in the U.S. Navy?
A: Scraping boarnacles off of ships!

23: How do we know our swine friends do well in high business circles?
A: Because ham goes well with big cheeses!

24: Why do pigs like to dig up the ground with their noses?
A: They’re looking for their roots!

25: What is a hog’s favorite dessert?
A: Butter pigcan icecream!

26: What did the Three Little Pigs finally decide to get?
A: Huff-and-puff insurance!

28: What did Porky Pig affectionately call his creator?
A: Oinkle Walt Disney!

30: At what Olympigs event do
our friends excel?
A: The piggyback race!

32: Do pigs like to play Monopoly?
A: Sure, but all they want to own is Pork Place!

33: What do you call someone who loves to spend 24 hours a day with pigs?
A: Pigculiar, to say the least!

35: Why do so many porkers end
up in Hollywood?
A: They’re all hams at heart!

36: Who just lost his job as emcee of Miss Pig America?
A: Bert Porks!

37: How do you cure ham?
A: Send it to bed and give it two aspirins every four hours!

38: What do they call a swine with two wives?
A: A pigamist!

39: Why do our pig friends shun big cities?
A: They prefer to live in small hamlets!

40: What Pigland teen star played in “The Lardy Boys’ on TV?
A: Porker Stevenson!

41: Where do pigs love to eat?
A: Anyplace but homethey just love to “pig out”!

42: What did they hunger to call it when Porky the track star got into the Guinness Book of World Records?
A: Pig’s feat!

43: Where do Oriental pigs like to vacation?
A: In Singapork!

45: Why did George Washington Piggy stand up in the boat sailing across the Delaware?
A: He was a show-off-a real Virginia ham!

46: Which writer is an all-time favorite in Pigland?
A: Sir Francis Bacon!

47: What Pennsylvania football team is most popular with pigs?
A: The Pigsburg Squealers!

48: Do pigs have anything to do with hockey?
A: Yes, they like to hit the hockey pork!

49: Which baseball team is a porcine favorite?
A: The Swilladelphia Swillies!

50: Why do pigs have good hand- writing?
A: They practice their penmanship!

51: Why does Jim Henson of the Muppets love Miss Piggy?
A: She really brings home the bacon!

52: What can we say about Miss Piggy’s career in show biz?
A: That she has climbed the larder of success!

53: Which song lyric did Miss Piggy take to heart?
A: You ought to be in pigtures!

55: Which magazine is a favorite of our porcine pals?
A: Newsqueak!

57: Why do policemen like to arrest pigs?
A: So they can grill ham!

58: Why did Miss Piggy refuse to go to the beauty parlor?
A: How could anyone improve on pig-fection!

59:why did Miss Piggy really refuse to go to the beauty parlor?
A: She was tired of getting the same old pig-sy haircut!

60:Why didn’t the astronaut land on the Planet of the Pigs?
A: He couldn’t find a porking place!

61:Do pigs like their food?
A: They think it’s just swill!

63:Are coins in Swineland two-sided?
A: Of course, they are pigheaded and pig-tailed!

64: Where are ants definitely not welcome?
A: At a pignic!

65: Which of our porky pals can become a national poster hero?
A: Smokey the Boar!

66: What did they call Porky when he went to college, starred on the football team, and dated the Prom Queen?
A: Pig Man on Campus!

67: What looks like a bunch of wild pigs, has 66 legs, and plays with a pigskin?
A: The Green Bay Porkers, the Chicago Boars, and the Los Angeles Hams!

68: What do pigs do when they play basketball?
A: Hog the ball!

69: Why do pigs like football in the first place?
A: They get a big kick out of it!

70: Why do Pigland porkers enjoy baseball?
A: They love to root for the New York Oinkees!

60+ Farm jokes To Make You Laugh

40 Banana Puns To Get A Bunch Of Laugh