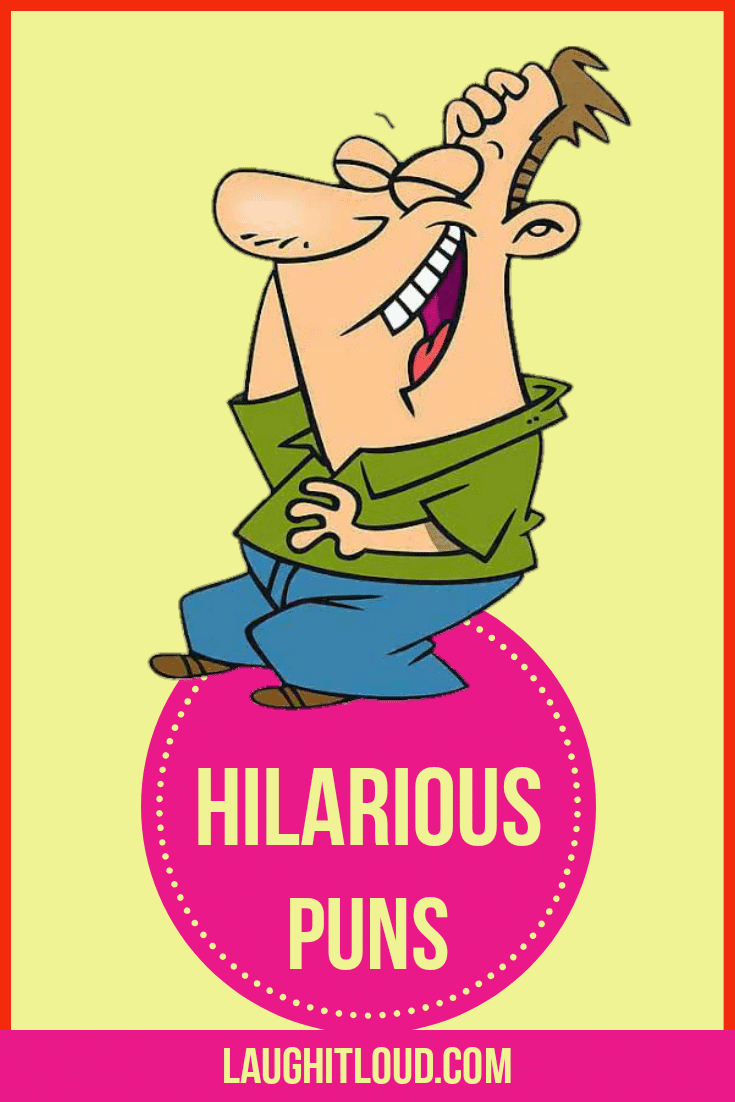 Puns are a great way to slip some wordplay into your conversation without it coming across as forced. They’re also an excellent way to show off your vocabulary and impress your friends – puns are a verbal puzzle where the answer is hidden in a word that sounds the same but has different meanings.

If you love puns, we have the best collection of puns on the Internet right here. The list is huge and we will keep adding to it so keep coming back for more! There’s something for everyone in this list of puns,

so no matter what type of humor you prefer, we’ve got it covered. Even if you don’t see your favorite pun listed here yet, rest assured that we will add to this article as often as possible!

1. I heard on the news that some guy was stealing wheels off police cars. The police are working tirelessly to catch him.

2. I can’t believe that viruses and bacteria would just invade my body without a permission. That makes me sick.

3. Three years ago my doctor told me I was going deaf. I haven’t heard from him since.

4. I remember the first time I saw a universal remote control. I thought to myself… “Well this changes everything.”

5. Yesterday, I was washing the car with my son. He said: “Dad can’t you just use a sponge?”

6. What do you call security guards working outside Samsung shops? Guardians of the Galaxy.

7. What did the scientist say when he found two helium atoms? HeHe

8. My son asked me to stop singing Oasis songs in public. I said maybe.

10. What days are the strongest? Saturday & Sunday. The rest are week days

11. Remember to poop before midnight tonight. You don’t want to be carrying the same shit into the new decade.

12. You’re living, you occupy space and have mass. What does that mean? You matter.

13. Dogs can’t operate an mri machine but cats can

14. Have you ever tried eating a clock? It’s really time-consuming, especially if you go for seconds.

15. If I have twin daughters, I’ll name one Kate. And I’ll name the other DupliKate.

16. I could make a million jokes about cash machines I just can’t think of one atm.

18. Before the clock strikes midnight on Dec. 31 be sure to lift your left leg. That way you’ll start off the New Year on the right foot.

19. I was watching Star Wars with my daughter. She asked why Luke was climbing inside a Tauntaun, I said to keep warm. She asked how warm is it inside? I said Lukewarm.

20. How much does Santa pay to park his sleigh? Nothing. It’s on the house.

21. I saw my wife, slightly drunk, yelling at the TV: “Don’t go in there! Don’t go in the church, you moron!” She’s watching our wedding video again.

22. I went into a pet shop and asked for twelve bees. The shopkeeper counted out thirteen and handed them over. “You’ve given me one too many.” “That one is a freebie.”

25. The doorbell rang and there was a little kid dressed as Gloria Gaynor. At first I was afraid… Then I was petrified! 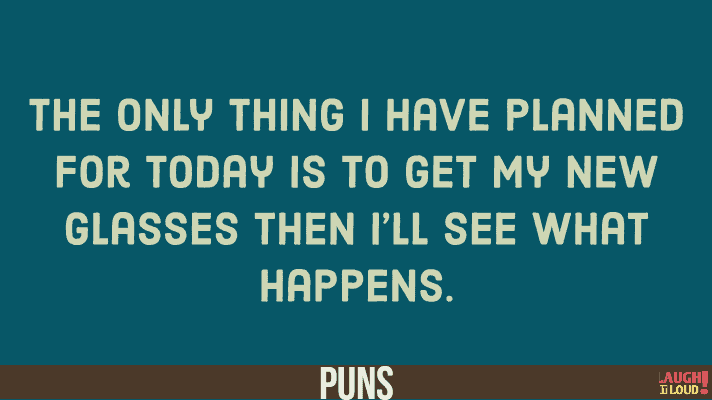 27. My friend couldn’t afford his water bill. So I sent him a “get well soon” card.

28. I have a pen that can write underwater. It can also write other words too.

29. They all laughed when I told them that one day I would discover the secrets of invisibility. If only they could see me now.

32. What do you say to your sister when she’s crying? Are you having a crisis?

33. I had a hen who could count her own eggs. She was a mathemachicken.

35. Whoever stole my anti depressants. I hope you’re happy now.

37. If you cut off your left arm… Then your right arm will be left.

38. Therapist: Your wife has complained that you never buy her flowers, what do you say to that? To be honest I had no idea my wife sold flowers.

39. I was in my garden and saw 10 ants running frantically… So I made them a little house out of cardboard. I guess that makes me their landlord and them…my tenants.

40. I’m deathly afraid of elevators. I take a lot of steps to avoid them.

43. In college I was so broke I couldn’t afford the electricity bill. Those were the darkest days of my life.

45. Singing in the shower is all fun and games until you get shampoo in your mouth… Then it just becomes a soap opera.

46. I ordered a chicken and an egg on Amazon. I’ll let you know.

47. This man in the gym just propossed and she said noooo well that didn’t work out

48. Do not trust atoms. They make up everything.

49. I’m going to stand outside. So if anyone asks, I am outstanding.

50. what’s the difference between me and a calendar? a calendar has dates

51. I once ate a dictionary. It gave me thesaurus throat I’ve ever had. 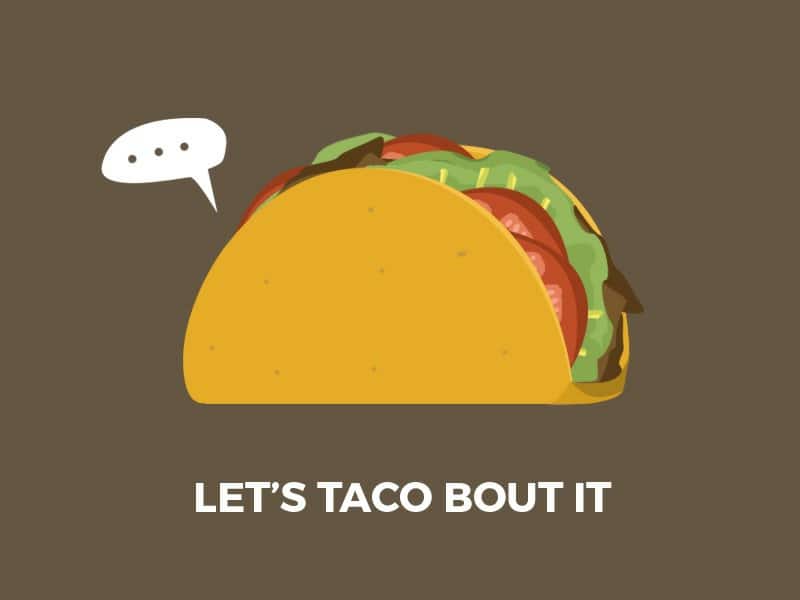 1. My sister thinks shes so smart, shes said onions are the only food that makes you cry So I threw a coconut at her

2. I accidentally drank a little food colouring last night. I ended up dying inside.

3. The mistake we made was to order a vodka for the bunny yet we knew he prefers hoppy beer.

4. You know the problem with grapes these days. People just aren’t raisin them right.

5. I have to eat breakfast without toast because I’m lack-toast intolerant. 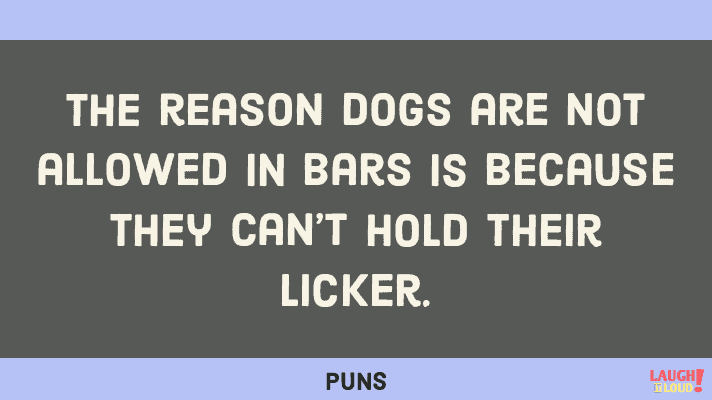 6. Instead of me drunk dialing you, allow me to enjoy the party and alcohol you later.

7. I saw a Korean martial artist holding out a basket of donuts. When I asked to take 2, he said no. I replied “can I at least Taekwondo?”

8. What does a waffle often say to a waffle iron? Hey, I will catch you later on the flip side.

9. The dinner I was cooking for my family was going to be a surprise but the fire trucks ruined it.

10. My mom is now on a seafood diet, when she sees food, she eats food. 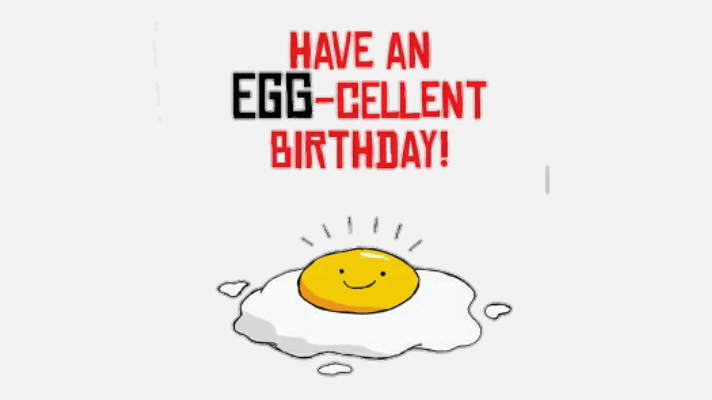 1. Your upcoming birthday reminds me of the words of the old Chinese scholar: Yung No Mo

2. I know you really like boats, so I made sure to get a present on sail for your birthday.

3. As much as I enjoy birthdays, I think having too many of them will kill you.

5. If you feel a bit lonely, forgotten, or just need someone to cheer you up remember…You can always change your birthday on facebook! 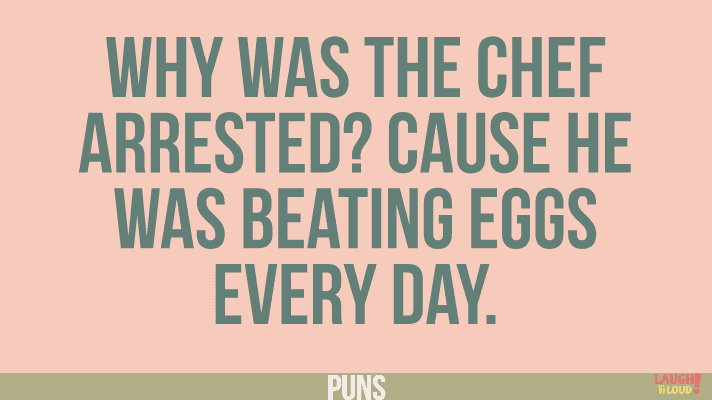 6. Someone overheard one birthday candle saying to another that these celebrations rally burn her up.

7. I bought you a new pair of glasses. This way, you can see how big of a happy birthday wish I’m giving you.

8. The only thing I got for my wife on her birthday was a big helium balloon.
It didn’t go down very well.

9. What did the Teddy Bear say after blowing out his birthday candles? No cake for me…I’m stuffed

10. Don’t worry if no one comes to your birthday party because then you’ll have your cake and eat it too. 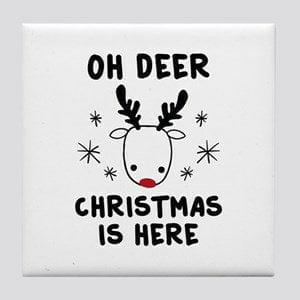 2. Santa was forced to attend a Christmas party because his presents was required.

3. With family and friends gathered around, I’m feeling a little extra Santa-mental.

4. I heard elves love to sing when they work on children’s toys. They are very good wrappers.

5. It’s the only time of the year when we can all get elf-ed up and no one would give an elf. 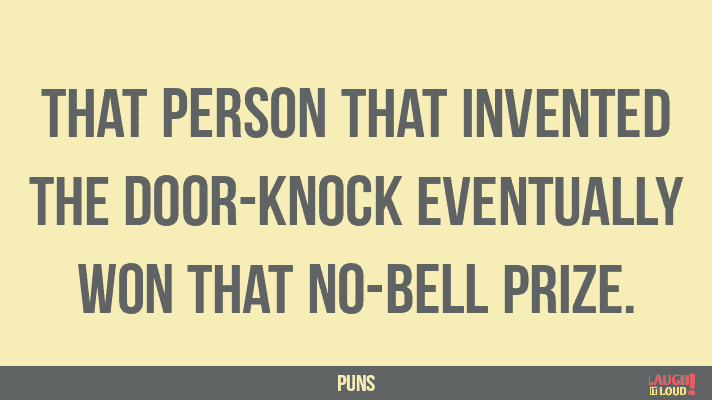 6. I asked my wife what she wanted for Christmas. She told me “Nothing would make her happier than a diamond necklace” So I bought her nothing.

7. Santa’s beard is so long because he’s bad at shaving. Why do you think they call him Saint Nick?

8. Another helicopter tried to land in our garden today. I think we’re going to have to reduce our Christmas lights a bit.

9. Sending letters to Santa up the chimney is definitely black mail.

10. I bought my son a fridge for Christmas I can’t wait to see his face light up when he open it

1. Knowing how to pick locks has really opened a lot of doors for me.

2. The past, the present and the future walked into a bar it was tense.

3. My grandma told me her joints are getting weaker, so I told her to roll them tighter.

4. I bought some shoes from a drug dealer. I don’t know what he laced them with, but I’ve been tripping all day.

5. He drove his expensive car into a tree and found out how the Mercedes bends. 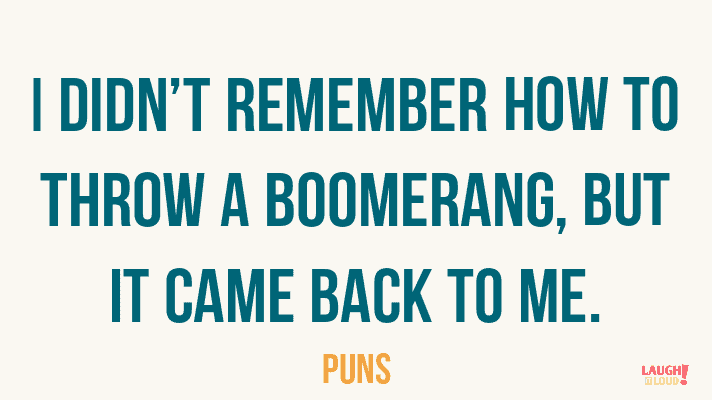 6. Did you hear about the guy whose whole left side was cut off? He’s all right now.

7. I accidentally went to bed with my contact lenses in the other night. My dreams have never been clearer.

8. For Halloween we dressed up as almonds. Everyone thought we were nuts.

9. I got my girlfriend a “Get better soon” card. She’s not ill or anything, but she could definitely get better.

10. I have a few jokes about unemployed people, but none of them work

1. The animals at the zoo were beginning to riot, so the farmer called the porcupine to quill the uprising.

2. A friend of mine was looking for a name for his laundromat for pigs. When he approached me, I thought of no better word than hogwash

3. A bear was killing moose for entertainment but in the end he wasn’t amoosed.

4. When asked why I painted a picture of my cat’s feet, I tell everyone it is her paw-trait!

5. I watched a documentary about beavers last night. It was the best dam show ever!

6. I don’t mind if it rains cats and dogs, as long as we don’t get any reindeer.

7. Never invite a crab to a charity event, they tend to be on the shellfish side.

8. The farmer rents out his cows on the weekend to a landscaping company that needs a lawn mooer.

9. It is perfectly fine to watch the elephants bathe because they always have their trunks on.

10. A man was hospitalized with 6 plastic horses inside him. The doctor described his condition as stable! 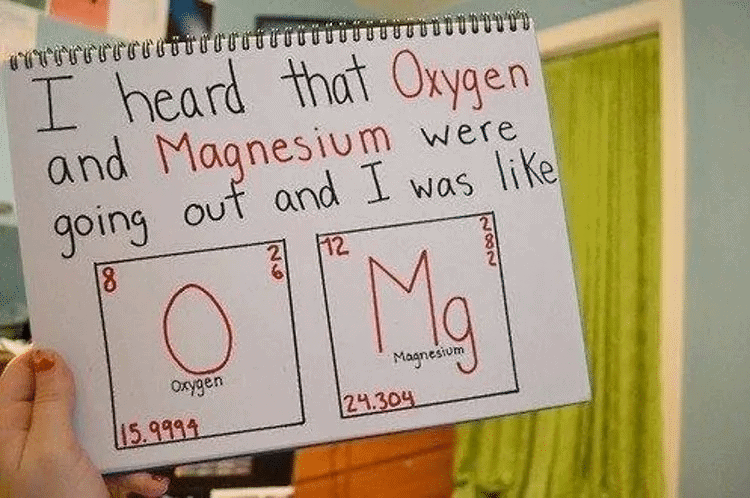 1. The neutron was always see hanging out at the local bar because he was never charged.

2. The two science teachers decided to break up because they couldn’t find any chemistry between them.

3. If the Silver Surfer and Iron Man team up, they’d be alloys.

4. My grandad died last month. We had to barium.

5. A photon checks into a hotel and is asked if he needs any help with his luggage. He says, “No, I’m traveling light.”

6. A chemical in science class can make your hands go numb But math will make you number.

7. The first day of school, I signed up for English, Math, Science, and Geography. The rest, as they say, is History.

8. My biology teacher asked “What’s heavier, the Indian or African elephant?” I said “The elephant obviously!”

9. I was reading this excellent book on anti-gravity and I find myself unable to put it down

10. The thermometer said to the graduated cylinder that you might have graduated but I have many degrees!

We hope you will enjoy our collection of short puns if any pun is left out share with us we will love to add it on our collection.

50 Tree Puns That Will Make You Laugh