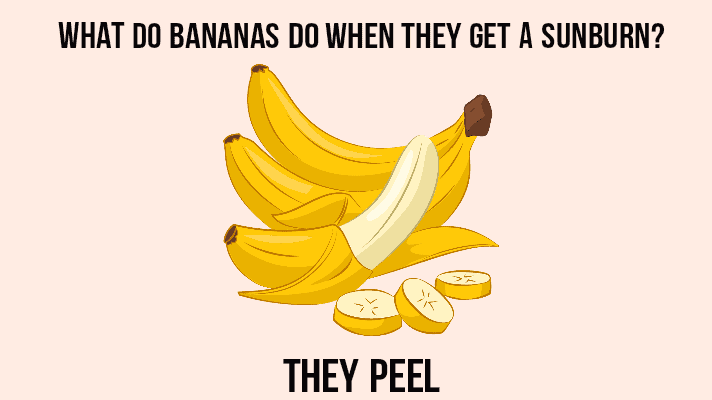 On September 22, Banana Day is celebrated, which is a tropical fruit that grows in a cluster of trees called banana trees. The banana is a fruit that is soft and sweet, it is born green and when it turns yellow it is ready for consumption.

Banana is a fruit that loved throughout the world and for that reason, there are several Banana puns that are shared worldwide, If you don’t know any and You’re looking for some here we have a list of the best banana puns that will give you a bunch of Laugh

1. Some girl just tried to chat me up by telling me how much potassium, on average, is in a banana. I just sat there like, K.

2. The ailing banana went to the doctor He wasn’t peeling well.

3. Why are orange and banana phones so popular these days They have appeal

4. What did the cop say to the banana as it was released from jail? Don’t Slip Up Again

5. I caught my son rubbing banana peels all over him. At first, I was worried. Then I realized it He was going to be all ripe.

6. A blind man was looking for bananas in a supermarket his efforts were fruit aisle

8. Did you hear about the banana that was a prosecutor? He won the conviction, but slipped up on appeal.

10. What kind of key opens a banana A monkey!

11. What do you call shoes made out of bananas? Slippers!!!

12. What is the easiest way to make a banana split? Cut it in half.

13. A grocery store caught a girl stealing bananas. They had no choice but to ban Anna.

14. What do bananas say when they answer the phone? Yellow.

15. Can i tell a banana joke? nevermind it just ‘slipped’ my mind

16. My girlfriend got mad at the amount of bananas I bought I don’t understand why, she asked for a bunch.

17. Did you hear about the guy who ate bananas whole? He didn’t peel too well

18. The best place to learn how to make banana splits is At sundae school.

1. I Find you very appeeling

2. Goals are like bananas, they all come in bunches.

4. Never try to make eye contact with anyone while eating a banana

5. You never know where to look when eating a banana.

6. Always take a banana to a party.

7. An old banana leaf was once young and green.

8. Life is full of banana skins. You slip, you carry on.

9. Every banana is a clone of itself

1. Why did the banana go to the hairdressers Because it had split ends!

2. What’s yellow and always points to the north? A magnetic banana.

3. Why are bananas never lonely? Because they hang around in bunches.

4. What do you call two bananas? A pair of slippers!

5. Why were the apple and orange alone Because the banana split!

6. Why was the banana so upset? Someone called him a plantain.

7. What’s yellow and goes 50 miles per hour? A banana in a washing machine.

8. What do fruit use to buy things? Banana bread.

9. What do you call banana motorcycle policemen Banana CHiPs

10. What made the banana such a smoothie Yogurt!