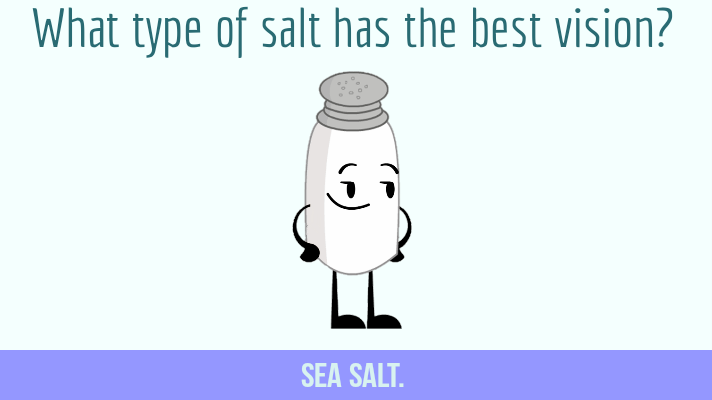 Qué: What do you call fifteen-year-old salt?
A: A salt-teen.

Qué: What type of salt has the best vision?
A: Sea salt.

Qué: What did the salt say to his girlfriend?
A: Wow, you’re so-dium beautiful!

Qué: Why do seals live in saltwater?
A: Pepper makes them sneeze.

Qué: Why does everyone add salt to their meals?
A: It’s sodium good.

Qué: Why did the neuron go to jail?
A: Because he was charged with a salt.

Qué: What do you do when you run out of salt for an experiment?
A: You get Mohr salt.

Qué: What kind of salt do gymnasts use?
A: Somersault.

Qué: ‪What did the paprika tell the salt around Christmas?‬
A: Seasonings greetings

Qué: What do you call a rifle that shoots salt?
A: An a-salt rifle

Qué: What do you call bacon with salt on it?
A: Salt and Peppa

Qué: Does anybody know any jokes about salt?
A: Na

Qué: What is the difference between an old light bulb and a pile of salt?
A: One is an incandescent. The other is Incan dessicant 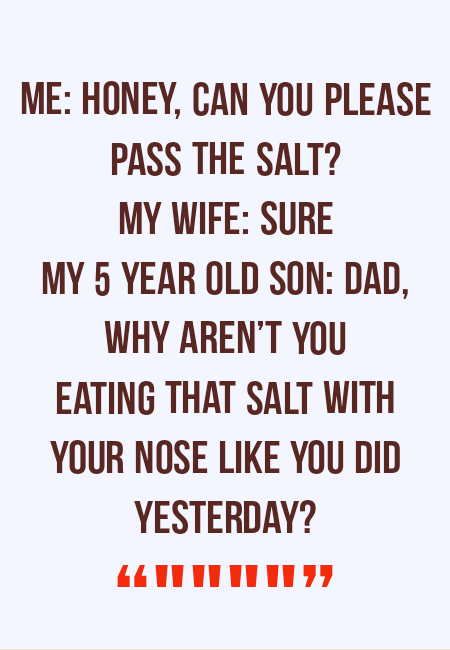 Qué: What did the pepper say to the table salt?
A: Why you So-dium fine?

Qué: Why did the Romans pay their soldiers in salt?
A: So they would end up with seasoned veterans.

I always take life with a grain of salt, …plus a slice of lemon, …and a shot of tequila.

Qué: Why does everyone add salt to their meals?
A: It’s sodium goooood

Qué: Why did the skeptic suffer from high blood pressure?
A: He was taking everything with a grain of salt.

Qué: What happened to the criminal magician who ate to much salt?
A: Cardiac arrest

My head chef had his 10 year anniversary in work today. I put some salt and pepper on him. He’s a seasoned professional

Two peanuts were walking down a dark alley. And one was a salted.

Qué: What did the salt say when the phosphate asked to bond with it?
A: “NaCl ater.”

Qué: What are the four seasons?
A: Salt, Pepper, Sugar and Flour.

Qué: What do you call a small Subaru car covered in road salt?
A: An Impretzel!

60+ Farm jokes To Make You Laugh

141 Science jokes That will Tickle your rational mind